There was a touch of sadness saying our goodbyes to the others, after such fun times in Uganda, also a little envy of their plans for a relaxed picnic at the source of the Nile in contrast to our days cycle of 120km to get us to the border, but the call of Kenya was too strong to delay any longer. 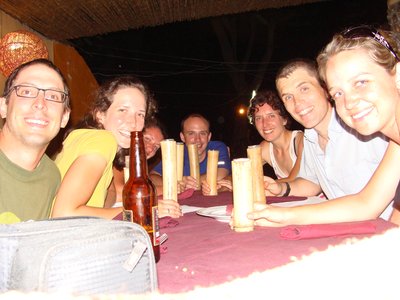 Beth was excited but also a little apprehensive, as now it was time to see if she could keep up! The last few weeks had worked out well, getting used to the hot sun and loaded panniers, as well as breaking Pol and Rob gently back in, after their rest in Rwanda, taking it leisurely through Uganda, the pearl of Africa, mixing up cycling and fun times with friends. Up until now, Beth has been loving it, but the question in her mind was 'would this continue now she was alone with the hardened cyclists Pol and Rob?'. 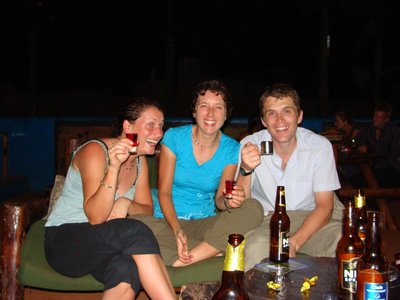 Prepared for hectic roads leaving Jinjya, we were pleasantly surprised with the initial dual carriageway, then later, the presence of a hard-shoulder. This provided some room for us, when crazy out of control buses, or huge lorries were overtaking, with little acknowledgment of our presence. At times like this we were very grateful of our wing mirrors, on which we had become quite reliant... a bargain buy, being the equivalent of about 50p and an extremely useful bit of kit! Our days pedalling took us through fields of sugar cane, little towns providing us with snacks of bananas and mangoes, and eventually to a little guest house in the border town of Busia. Happily washing off the days sweat in a cold shower, Beth was pleased to have completed 118 km and survived the afternoon's temperature highs of 39 °C, just an average day for Pol and Rob. 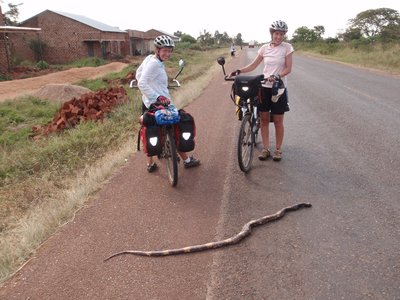 Cycling through Busia, in the pre-dawn darkness, the town was already bustling, a man starting to cook chapattis by candle light, and a multitude of pink shirted men cycling bikes providing a taxi service to those sitting behind them on the pannier racks. We reached the border with the first light. 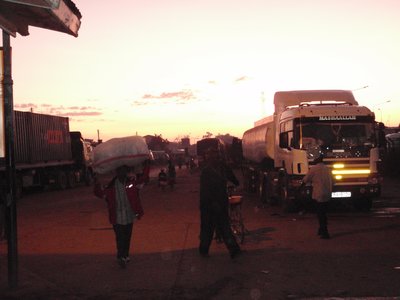 No border seems to be the same, nothing is standard. There are many unwritten rules: 1) No photographs allowed that might threaten security. 2) One should have exactly the right amount of US dollars in order to pay for your visa, because it is apparently unreasonable to expect that they might have change for you! 3) No cycling across the border, you must push your bike; whilst obediently pushing our bikes across the border, as everyone was doing, a man told us we could now cycle, we subsequently got on our bikes and started pedalling our way into Kenya, only to be stopped by a large man in uniform telling us to get off our bikes. We explained that someone had said we could cycle, the officer asked who, as we turned to show him, our man was no longer in sight, and given that the officer had a very big gun, once again we climbed off our bikes, to push for the final few metres! 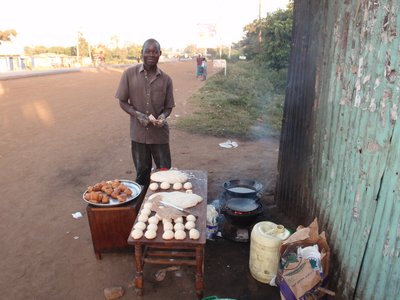 Now we were in Kenya, Pol and Rob's tenth country on their journey home. We'd heard reports of Kenya being less friendly and hospitable towards foreigners and more particularly independent travellers. For this reason, we planned our daily destinations to be cities where we could find guesthouses, rather than deserted places in which to wild camp. Unlike the reports we'd heard, we were extremely welcomed by the Kenyans who instead of shouting 'umzungu!' (white person) or 'Give me money!', as we passed, they would say 'Karibu' (welcome) and 'Safe journey'. Likewise when we stopped for a drink or some lunch, instead of the large group of children and adults who'd stand breaching our personal space and unashamedly staring, the Kenyans would greet us and continue on their way.
Initially there didn't seem much difference in the landscapes of Uganda and Kenya, but gradually the expanse of the Kenyan plains spread out before us, giving a larger grander feel to the country we were now in, which matched with the sense of greater wealth and development we were getting.

For the second time in just a couple of weeks we crossed the equator...it would seem the GPS has got a little confused and is taking us West to East instead of South to North. 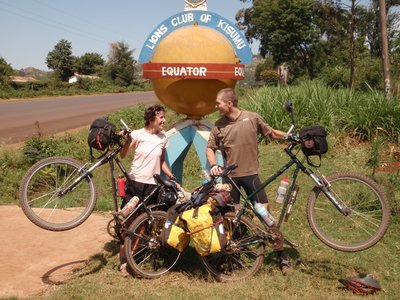 across the equator again!

Not long after crossing the equator, we caught our first glimpse of Lake Victoria, excited not only to see it, but also Kisumo on its edge, Kenya's third largest city, the place where our days cycling would end....and it was at the bottom of a very long awaited and long-lasting down hill!
After checking out a few places to stay in Kisumo, including the Imperial Hotel, a tad out of our league, we took a ride in a little rickshaw, to give Beth's aching bum a rest, and watch the most fantastic sunset over Lake Victoria.

Once out of the long flat plains, it would seem that Kenya also has some pretty big hills and mountains. Unlike Uganda's hills which although frequent are not too big, Kenya's seemed to go on forever. It is hills like these that we are appreciative of big lorries that also go slowly and accommodate us grabbing on behind and getting a tow! It was on the way up one such hill that we saw a huge cloud of black smoke, and wondered what it was coming from. On reaching the top, and passing all the long queue of lorries that had passed us on the way up, we came to an overturned diesel carrying lorry, that had collided with another car, and subsequently ignited, not only itself, but also the adjacent field. Thankfully no fatalities. 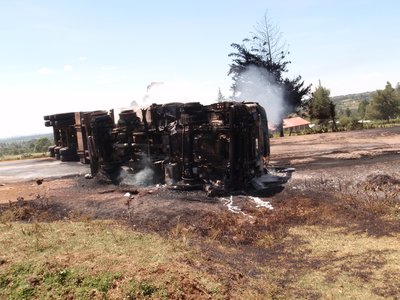 We did some rubbernecking, cycled through the excitable crowd, and continued on our way, past the very long queue of stationary traffic, that had spread across onto both sides of the road obstructing our pathway which we naively thought would be clear!

Leaving with the first light in order to cover the long distance before the unbearable afternoon heat, results in enjoying the best part of the day. Morning cycling is fantastic, the air is cool and fresh, the light gentle, as the rising sun shines upon the mist that still rests across the plains and valleys. 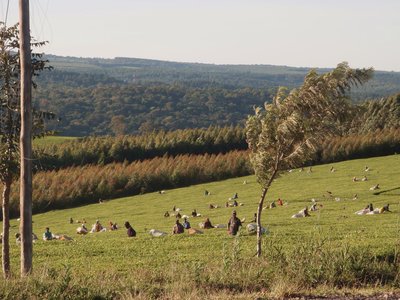 Leaving our 'campsite' in the grounds of the Tea hotel, Kericho, we first cycled through the fragrant tea plantations, scattered with people busily picking. This was the final of a few long days, and although being slightly shorter at 92km, seemed to be a never-ending series of up hills, accompanied by a strong head wind. The scenery was beautiful, through the hills, and thankfully being higher again, at 2500 metres meant the temperature was more manageable. 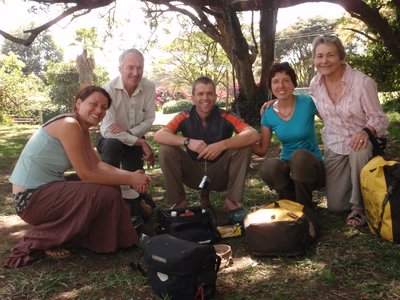 The end of the week brought us together with Rob's parent's Mick and Dorte, and our friend Liz at her home in Naivasha. What a perfect way to end the week, G&T's on the edge of the steely blue lake, reflecting the hills, whilst the sky hailed a bright full moon, and pink clouds which were mirrored by the pink rim of the lake, created by the myriad of flamingoes. 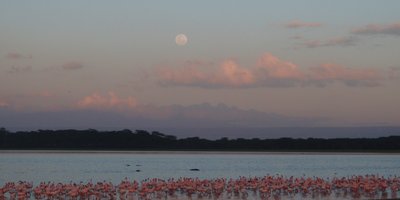 Posted by robandpol 10:15 Archived in Kenya

Still following your amazing adventures avidly.Thank you for such an eloquent and informative travelogue...its almost as good as cycling thro' Africa with you.....I wish!! God Speed.
love Margaret

What an amazing journey, I am enjoying it so much in a couch potato sort of way. Well done to Beth for keeping up with you 2 gazelles. xxxxxxxx

by Liz and Steve