The Meander Through Uganda

Round hotels and minibus taxis

Thoroughly satisfied with our chimp encounters we resolved to head off early and attempt a sizeable dent in the 400km which lay between us at the Crater Lakes near Fort Portal and Jinja, on the shores of Lake Victoria, where the Nile begins. The first 20km took us to Fort Portal along a decent gravel road with spectacular views of the Rwenzori Mountain Range – “The Mountains of the Moon”.

We stocked up on petrol, snacks, jam and porridge and indulged ourselves with ice-cream ( ;0) thanks Ben) in the little town in celebration of our return to tarmac. Heading out of the town lush green tea plantations gave way to dense virgin forest and the seven bikers sped along invigorated by the cool shade and smooth road. 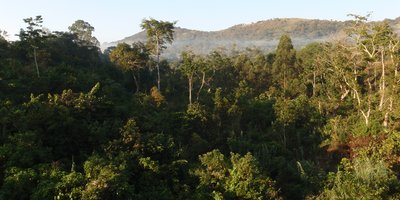 By and by the bikers tired and we pulled over to pee and re-energise on our newly purchased Fort Portal snacks. That is six of us pulled over to re-energise. Ben “The Hud” Hudson, however, was nowhere to be seen. He had last been spotted a good half hour or so before, a mere speck on the horizon as his racing spec bike finally came into its own and he opened it up leaving the others for dust. Being left for dust had it's advantages. As we chewed our chocolate bars we were treated to a sight to drive any twitcher wild with envy as three pairs of Great Blue Turacos flew overhead and perched in the tree just next to us. 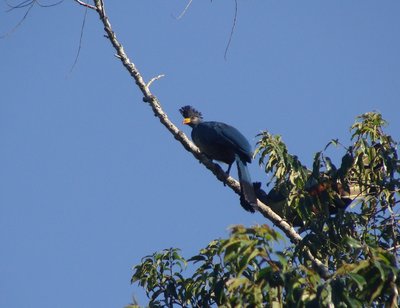 The day progressed, the temperature soared, the kilometres ticked by and in the afternoon heat our dissipated group re-convened in an unremarkable Kyenjojo town. Sipping cold cokes and fanta our eyes were caught by a very strange sight. On the edge of the tumbledown town stood a substantial tower several stories high surrounded by walled grounds. So peculiar was the sight that we had to go and investigate to find out what it could possibly be towering above all the local single storey dwellings. The top bet was UN offices. 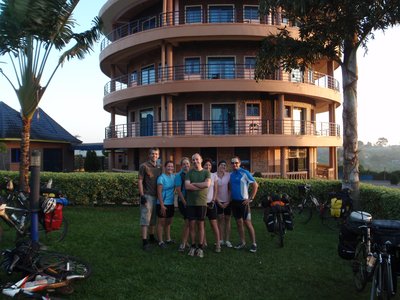 A big round hotel!!

The truth was even stranger. The building was a five storey hotel complete with swimming pool and sauna. We jumped at the unexpected opportunity to escape the afternoon heat and plunged into the cool water of the pool. 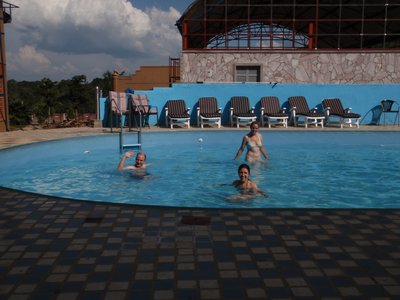 After some hard-nosed bartering we managed to persuade the management to let us camp in the grounds providing we ate our meal in the restaurant. We slept soundly feeling very secure and rose bright and early ready to slip a few kilometres under our belts before the sun got us. The ride began with some significant downhill which turned into good undulating hills with each downhill pushing us into the next up. Pulling over for coke mid morning we met some more Mzungus. 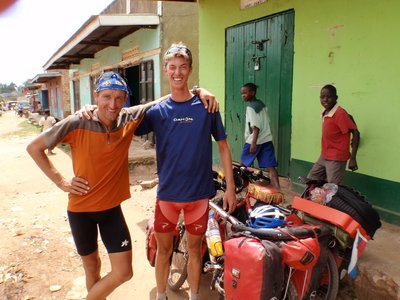 These very friendly Slovenians had cycled down from Addis Ababa. Pol and Rob got talking and the others headed on. We swapped stories and gleaned valuable information about the road ahead including the all important phrase “not too spicy” in Amharic – apparently all Ethiopian food is very hot and spicy! The brief exchange had quite an impact on us as these guys had entered into Kenya from the Omo Valley in Ethiopia (“The Peoples Region”) and down the western side of Lake Turkana. We had previously rejected this route as we had thought it unsafe but we now learnt from the Slovenians that it was a real highlight. Food for thought in any case. We also learnt that the road between Mityane and Jinja was terrible cycling; “Russian Roulette with lorries” as they put it!! We swapped details and said our goodbyes anxious not to get too far behind the others since we were carrying all the supplies for lunch – including a rather large and much coveted wheel of cheese from Fort Portal.

We caught up with the others just in time for lunch at the pre-arranged distance of 78km. And there they were at 78 km ON THE NOSE sitting in the shade. After lunch the temperature rocketed but we pushed on and managed to cover the remaining distance to Mubende. While the posse took refuge in the garage, draining the fridge of cold drinks and, incidently, heating the small room with our sweaty bodies to well over the outside temperature (nice!) Rob and Ben P powered up the hill to reccy the town's accommodation options. A final push to the VERY top of the hill up a bumpy, sandy, gravel road got us to the “Town View Hotel” - streets ahead of the closest competition and well worth the extra exertion. We sat around that evening refreshed and showered, clothes hanging up to dry drinking sweet cups of ginger chai feeling pleased with the longest day we'd done together; call it 100km. Excellent going for the newbies (and the oldies!)!!

We set off at dawn and witnessed this stunning sunrise. 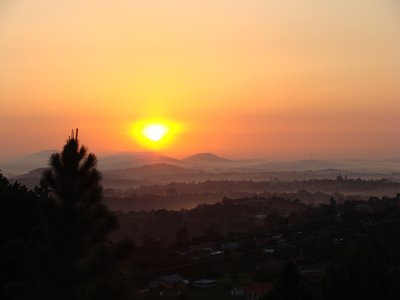 Then re-fuelled with banana filled chappatis and chai mid-morning. 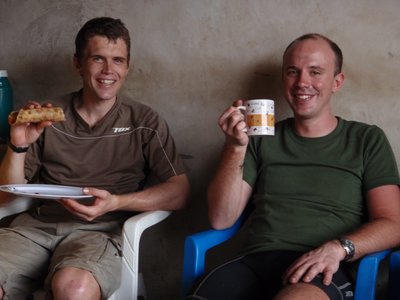 We reached our destination, Mityane, in good time and checked out the local digs. Although the “Half-London Inn” looked perfectly adequate we still had a lot of the afternoon to play with and were not too enthusiastic about “chilling out” in Mityane. The Hud got on the case with some very adept bartering skills and before long we had comandeered a private minibus taxi. Packing it full to bursting; 7 bikes, 7 bikers, 2 drivers and all our luggage, we happily set off for Jinja. 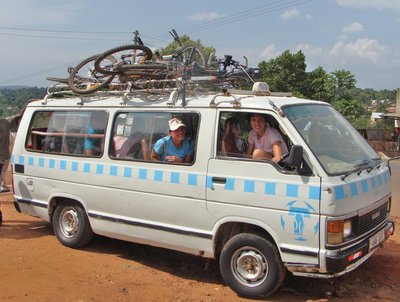 A minibus full of bikes and bikers

Jinja was the end of the road for this leg of the trip and spirits were high as we spent the evening chilling out in the backpackers eating twickers and snixes and seeing how many we could fit in our mouths at once.......... 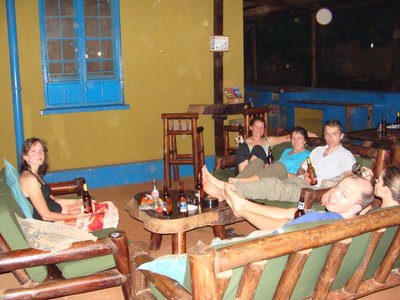 Jinja is the “adrenaline centre” of East Africa if you believe what your lonely planet tells you so we couldn't pass it by without sampling the white river rafting. We had a fantastic time and then headed on again downstream 50km to set up camp on an island in the Nile called “The Hairy Lemon”. 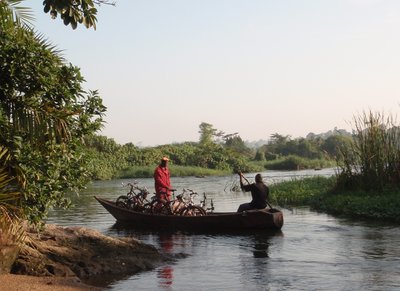 Seven bikes in a boat

On the way to the Hairy Lemon a local man accosted Beth: “Give me your bike”. Beth was not in the mood. “Yeah Ok, if you give me your T-shirt and your trousers.” She replied dryly. Then on seeing the guy examine his t-shirt and his trousers with a weighty expression on his face as he debated their worth to him she hastily added “AND your house.” Luckily for Beth that did the trick, the bike was not deemed a good swap for a house and the guy went on his way, fully clothed. 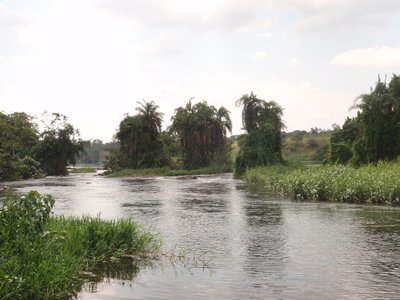 Great summary...lots of out loud laughs. Glad you didn't include evidence of me with 2 snickers in my mouth!!!! Missing you and wishing I was still with you! x

I will start writing my blog entry NOW. If I finish it before you enter Europe I will consider it a small personal victory.

I know what Beth means - wish I was there too......maybe in some sort of support vehicle.

Will be in touch with blog soon - keep nagging me!

HELLO THE HUD... COULD CURENTLY DO WITH A SUPPORT CAR CARRYING LOTS OF COLD JUICE... WE ARE MELTING! THOUGHT OF YOU THE OTHER DAY WHEN FELL OFF MY BIKE AND NEARLY VOMITED WITH HEAT EXHAUSTION - NOT NICE!

are you guys ever not cool??? I have really enjoyed reading your blog in my boring american life and I am glad to see that you guys are making it through africa quite fast. I got the letter that you guys and miriam sent and it made me very happy(I even put it on my wall next to my other africa pictures). Anyways glad to see you guys doing well and keep on blogging!
magenta
ps eat lots of pudding!

LOVE U MAGENTA! WE ARE CURRENTLY MELTING IN N KENYA... HOPEFULLY WILL GET THE PHOTOS ONLNE SOON.

NO PUDDING HERE THOUGH

Hey guys,
miss lots. The Chalet has been invadede other German couple now and today was Clementine wedding! She was incredibly beautiful and the wedding was huge. We all went at 11 o'cok, the time, that was swritten down on the invitation. Finally it startet T-w-o hours later. Then a 2,5 hours ceremony and then a reception h a lot of food and even 4 small wedding cakes! Crazy- I would have never expected that!!! Thanks so much for your letter. We all met at the Schumanns last night. I was so excited to read it! (but I'll answer that and send a wedding picture later).
Still loving your blog, Miri from the rainy land of a thousand hills...