URGENT - Don't buy roses for valentines day without reading this.

In today's age of conscientious consumerism popping to the shops is a complicated business. We want to shop responsibly. We want our purchases to be environmentally friendly and pesticide free, fairtrade and with a low carbon footprint. We don't want to encourage the world domination of multinational supermarkets; we want to support the cornershop.

With all this in mind the temptation of dropping into Tesco's on the way home from work and grabbing a dozen very reasonably priced, flawless red roses produced in Kenya for valentines day sets the alarm bells ringing at a deafening pitch. Think of the air miles. Think of the pollution. Think of the carbon footprint. THINK AGAIN. 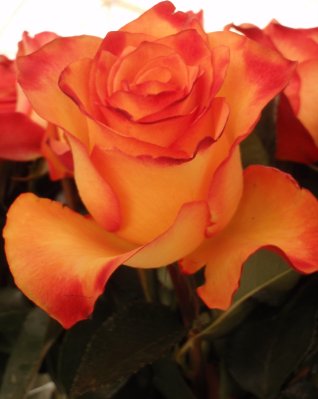 We took a tour of Kenya's biggest flower farm, Oserian, and were surprised by what we learnt..... 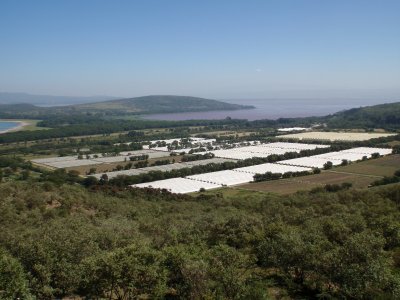 View of Oserian flower farm near Naivasha in Kenya

Greenhouses? In Africa? On the equator?
When the first flower growers came to Kenya and put up greenhouses people thought they were crazy. When some dutch people suggested heating the greenhouses their fears were confirmed. However there was method in the Dutch madness and the flower yield increased by 20% as the dreaded Black Spot all but vanished. Black Spot is caused by a fungus whose spores are only released when the temperature drops below a certain level. The theory follows that if the temperature doesn't drop too low the Black Spot doesn't spread and it has been proved to be correct. 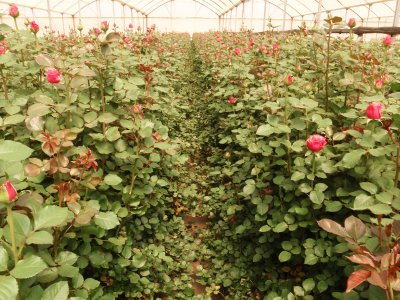 The sun always shines in Kenya so a lot less energy is required to keep the greenhouses at the elevated temperatures than would be needed in cold, wet Europe, and the active heating that is required is provided by the on-site geothermal plant. 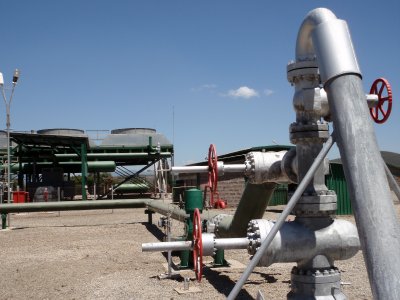 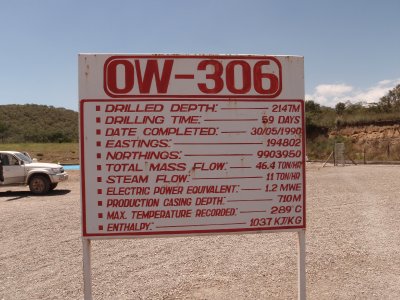 Located in the middle of the Great Rift Valley Oserian is ideally situated to tap into the Earth's internal heat source via the fault line in the tectonic plates. Drilling 2km down through the earth’s crust was no mean feat but the benefit has undeniably justified the initial outlay. The mixture of steam and CO2 rushing up from the core at 150 °C is used not only to heat the water which heats the greenhouses but also to drive electricity-producing turbines. These supply all the electricity used by the flower farm, the clinic and the schools. Even the CO2 released is not allowed to dint the Ozone; it is trapped and piped to the greenhouses to feed the photosynthesis. 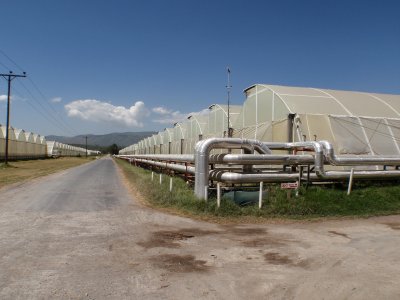 Pipes channeling near-boiling water and CO2 to the greenhouses

The carbon footprint of the African rose is looking good up to this point. It looks even better when you learn that the amount of CO2 fed to the flowers from the farm's geothermal plant is insufficient. Oserian makes up the deficit by purchasing the CO2 released by the national geothermal power station adjacent to the farm thus preventing it's release into the atmosphere. Independent assessors from Bristol University calculated the carbon footprint of each Oserian rose including air freight to be 1/10th that of a rose grown in Holland where the greenhouses are artificially illuminated and heated 24hrs a day by electricity and kerosene. 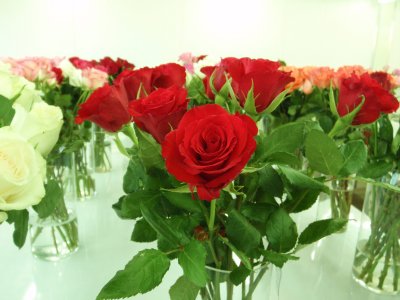 Biological control
The flower farm uses many innovative techniques to control pests but our personal favourite was these little guys.

These indigenous mites are bred in greenhouses full of the beans on which nasty little bugs gorge themselves. The red mites feast on the pests and breed like crazy. When they are needed a slight, controlled temperature change within the greenhouse causes the pests to climb down the stems whilst the valuable mites climb up the stems and congregate obligingly in the yoghurt pots placed on top of the stems. They are then conveniently transported to the area of the farm where they are needed to control the pest populations.

Fairtrade not aid
Oserian is a fairtrade company. This is not because they feel strongly about fairtrade. They are a business and their priority is profits but most of their roses are sold to the big supermarkets in the UK and the supermarkets want fairtrade flowers. 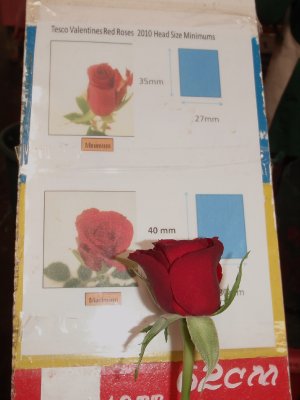 The supermarkets want fairtrade flowers because the shoppers want fairtrade flowers. So the 4000 employees at Oserian are looked after pretty well. A house with running water comes with the job as does a fair wage. There is healthcare and a clinic for the staff and schools for their children all provided and paid for by Oserian as well as a communal hall with a big screen TV and a football stadium. The staff have the option of a bike paid for by monthly deductions from their salary and can also take part in a “small loans initiative”. The job is also kept interesting since the workers have responsibility for all the stages of one row of flowers in the greenhouse from grafting to packing. 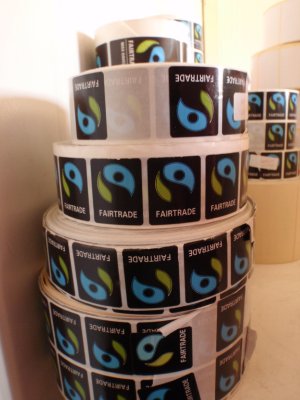 As we travel through Africa we have seen first hand that there is almost nothing to show for the 1 trillion dollars of aid and charity money poured into the continent over the past 50yrs. Africa needs trade not aid and preferably fair trade where healthcare, schooling and fair wages are guaranteed and where the goods are processed within the country. A commodity gains it’s value once processed and traditionally that happens outside Africa so she loses out on most of the profit. Who do you think makes the most money; the Belgian Truffle maker or the Congolese cocoa farmer?! 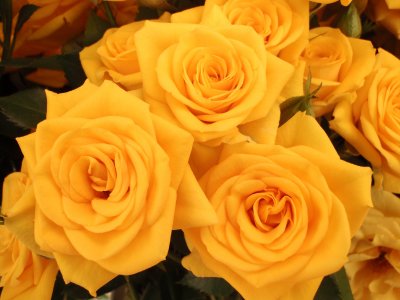 Oserian grows, picks, packages and transports it’s flowers to the British supermarkets and Dutch flower auctions. The Supermarkets put the flowers on the shelf and collect the money! Africa desperately needs sustainable, fair trade, and industry, like the flower farm, to add value to it’s raw products. 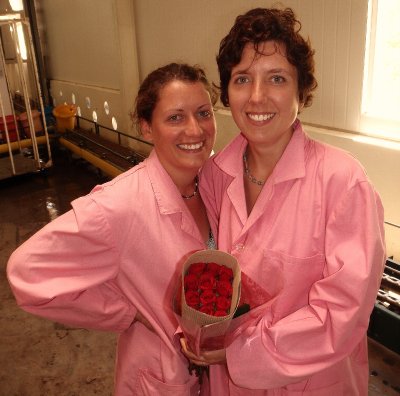 An African product processed in Africa

So now you can go to the supermarket with a spring in your step and buy red roses flown in from Africa. You will be supporting the healthy employment of many people there. Oserian supplies Waitrose, Morrisons, Tesco and Sainsburys (among others) with fairtrade flowers exporting 400,000,000 stems a year – that's six for every man, woman and child in the UK. So when you've bought some for your valentine buy some for yourself, and your mum, and your friends and your sister – there's plenty more where they came from!!!

Brilliant!
But unfortunately we're going to be in the middle of the Turkana desert for Valentines - so can someonee buy an extra African Valentines rose for pol on the 14th!
rob

Love it! Awesomely written..you did so well to remember all the details Johnny told us. Perhaps you can do an advert to get people to buy me roses too!!! ;0) Can't wait to hear about Ethiopia!

You guys are incredible. I am still reading your blog and praying for you everyday. Keep up the good work.

am going to see waitrose today will show them this