Heading into the desert.

The road to Turkana

We said good bye to Mick and Dorte (Rob's mum and dad) after a wonderful time with them and set about organising our kit for the journey Northwards. We were heading for Lake Turkana, 350km North of Kitale, which we planned to follow up and over into the Southern stretches of Ethiopia.

We had consulted several sources about the stretch of road between Kitale and Lake Turkana and the advice we got ranged from polar extremes. Our conclusion was that there has been trouble in the area but it is tribal consisting primarily of cycles of retaliatory cattle raids and it shouldn't affect us as we pass through. Our more pressing concerns would be the temperature and carrying adequate quantities of water. With this in mind we increased our carrying capacity to 30litres with a couple of jerrycans.

Setting out from Kitale the land around was green. There were villages splashed about and the views were beautiful.

30km into the morning we began to descend between huge hills. 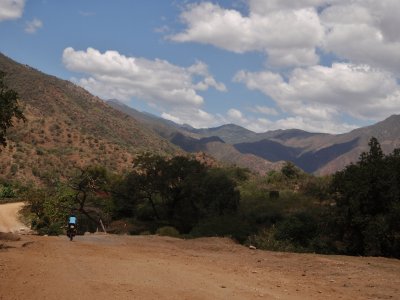 Descending into the heat

As we dropped a river joined us from the West and we followed it as it wound through the ever-increasingly barren landscape. The temperature increased and we peddled on, the villages now becoming very infrequent. We saw no cattle as we cycled which we found reassuring since we figured no-one would be cattle raiding where there aren't any cattle! In fact a few weeks previously there had been a huge raid in this area during which 4000 heads of cattle had been rounded up and taken across to Northern Uganda.

We were aiming for a research station in the area where we knew we could camp. In the vague vicinity around 12 o'clock we stopped at a small village to buy what we could for supper and were delighted to see a group of old men resting in the shade of an acacia tree, each one sitting on a tiny stool wearing little more than a cloth draped over one shoulder and around the waist. The tiny stool is the Turkana stool named after the tribe and area where it is found. It is one of these stools that Rob has been carrying with him since South Africa, a gift from his sister Stina which she bought 10 years ago as she'd passed through Kenya. The men waved happily as we passed them by with our tomatoes and onions from the stall. Soon after we saw the sign for “Marich Pass Research Centre” and we peeled off the gravel road into the sand scattering a few lucky surviving cows. 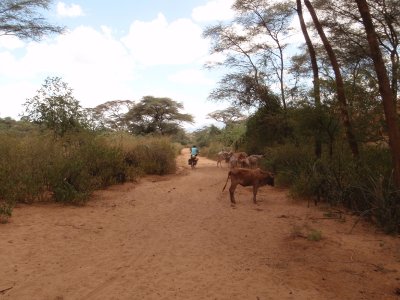 The camp spot was next to a river and well shaded. There was a tap nearby from a bore hole providing drinking water. We sheltered from the afternoon heat entertained by the trickle of children on their way home from school, collecting water as they went, and a herd of goats who couldn't be kept away no matter how many times the staff chased them off.

In the morning we set off before dawn. 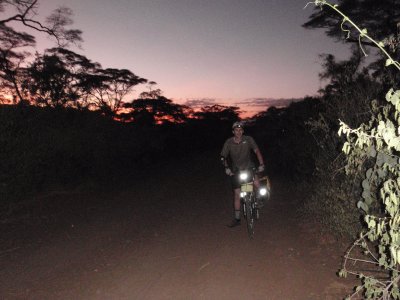 Sunrise was beautiful; still and cool. We startled some tiny buck (DicDics) as we silently sped along and at one point had to rub our eyes as a solitary man in the middle of nowhere emerged onto the track clad in a cloth and carrying only his little stool and a bow and arrow!

The road was rough; pot holes dissolved into gravel and in the gravel corregations grew, rattling us around on our bikes. We stopped on the edge of a national park to top up our water from the rain water tank. The rains had last fallen at the end of December and no more were expected until March.

Leaving the hills behind

By mid day the temperature was a soaring 41 °C and the bumpy road had taken it's toll. Thankfully the day's first and only hub of civilisation was only a stone's throw away and we pushed ourselves on into Ndali Village. As we reached the small rickety buildings decorated by groups of people milling around we stopped to ask if there was somewhere we could get some food. The young man we asked greeted us enthusiastically; “ Welcome, welcome to Turkana. Yes, yes, that white building over there makes food”

We dragged ourselves over to the white building, parked our bikes, and sunk into the plastic chairs inside. The people were so kind. The owner ushered us onto a different table that was not in the direct line of the sun. We got ourselves a plate of liver and rice each and a litre of refreshing cold fluids – coke/mineral water. We were aiming for Lokichar that evening but it was still 40km further. The restaurant owner welcomed us to stay and sit out the afternoon sun inside before continuing later on. It seems this is what people do. The restaurant filled with people escaping the heat.

We didn't make it to Lokichar that evening. We left the restaurant at 4pm when, although slightly less fierce, the heat was still intense. We covered another 20km and met a smartly dressed man cycling in the opposite direction. 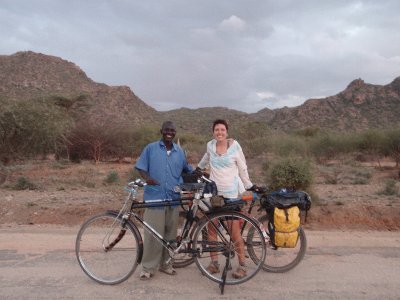 William is a Turkana man who lives in Lokichar but pastors the people of the next village 25km away. There are about 60 people there and, as elsewhere in the region, the area is incredibly dry and there is not enough water. He turned around and cycled with us a while. We chatted and then he turned back and continued on his journey. Shortly after he left us we pulled off the road and set up our camp.

Aware of the dangers of camping in a dry river bed in an area of flash flooding the temptation of the flat thornless sand and the reassurance that the rains were not expected until March won us over. The desolate spot was utterly beautiful. The temperature did not drop sufficiently all night but the beautiful stars sparkling through the net inner of the tent were more than adequate compensation. I don't think either of us could honestly say we slept well but we were well rested.

WOW! I am soo jealous reading this from my hospital accomodation flat in ipswich! excellently written entry. wish I was with you , although it does sound bloody hardcore! I flew over desert for hours on that plane...good luck with pedalling across it. come on home soon. x x x

Hey Rob and Pol - I love reading what you've been up to - great photos, really interesting! Keep safe! Things a bit mad here - another exam coming up soon... But Ben Greenwood's taken it by storm when he did it in Jan, I've heard... Did you hear about my Grandma Buckley's death in Nov? Wierdly, it was amazing in a lot of ways, but I won't go into detail now. I'll pray for you that you keep safe and continue to have an amazing time. Can't wait to see you when you get back. Jo xx