Dirty Harry and Other Business

It was so great to see Rob's Mum and Dad and Kenyan family friends – Liz and Ruli, especially as they had come to pick us up in a truck into which we chucked the bikes – in anticipation of a week of R&R.

Arriving at Ruli and Liz's house we were greeted by their lovely staff – Lucas, Mohammed, Zachinah, Violet and Osman. Mohammed commenting how he remembered last time I visited – 20yrs ago! 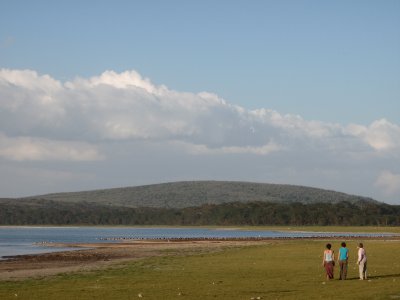 After sunset stroll by the flamingo lake that the house overlooks we crashed into the comfort of crisp white sheets – no more sleeping in the tent for a whole week!

The suncream and energy bars were set aside and Rob and Mick set to work replacing the rear sprocket of both the bikes.

For those of us who don't know much about bikes – ours are pretty special – the gears are all inside the rear wheel hub, so there is only one chain ring (sprocket) on the rear wheel (unlike most other bikes which will have 5 to 8 rings). Consequently the chain always runs on this chainring which had completely worn out – and as a result the chain was beginning to slip with a horrible crunch now and then. 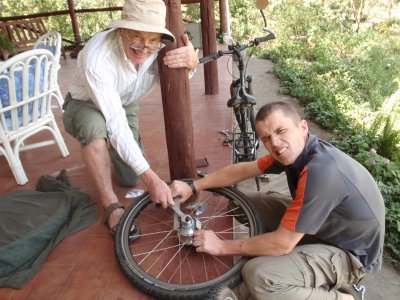 As you might imagine - a chainring that has had 8000km of peddling to tighten it into position – is not very easy to remove.

Dad and I tried our hardest but couldn't do it – so set off to the flower farm workshop.
“Do you think they will be able to do it” I asked.
“Of course – they maintain the Geothermal Power Unit – they'll be able to fix your push bike” came Ruli's reply... unsure of how geothermal machinery relates to bikes we set off.

Sure enough, within 5 minutes the chainring was off Polly's bike. But while heaving on rob's chainring the tool ripped apart... doh.

“Do you have a tool to remove sprockets” I asked the beefy mechanic -
“No” he said – “in Africa we use this” gesturing to a rather heavy looking home made metal hammer.

With visions of him smashing the chainring off the incredibly expensive German gear hub, I told him to hang on while I went to get another tool. 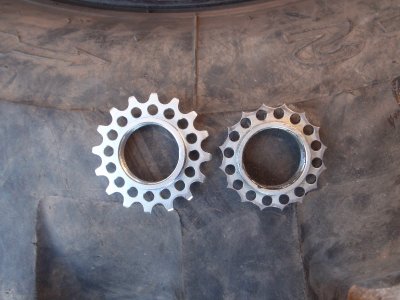 On my return the sprocket was removed – and the hub still intact – the African way worked fine! 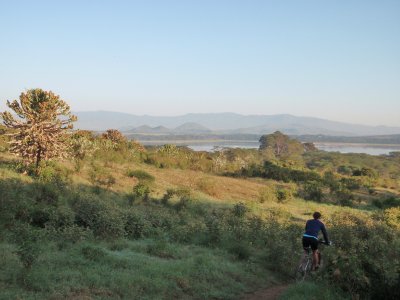 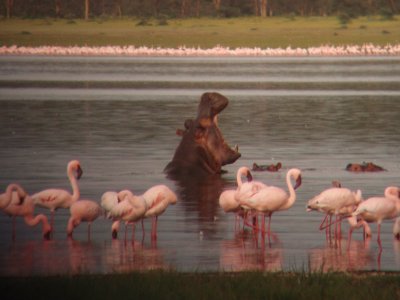 The following morning the new parts were put to the test on a bike ride from the house. Within 1km we spotted flamingoes, hippos, giraffe, waterbuck, jackels, warthogs, various gazelle, zebra and multiple different colourful birds all living in seeming harmony with the local people. It was better than any of the rather expensive game walks undertaken while we lived in South Africa. 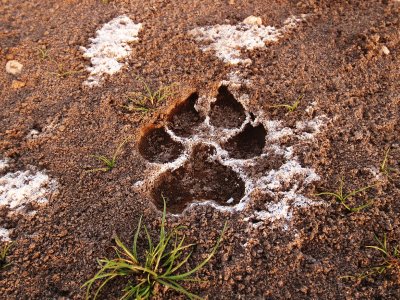 Unfortunately we didn't see hyenas... but we heard them howling at night and saw their tracks at the lake.

Whilst Ruli could watched Man U vs Arseneal without interruption he had organised a trip to the game sanctuary owned by the flower farm. 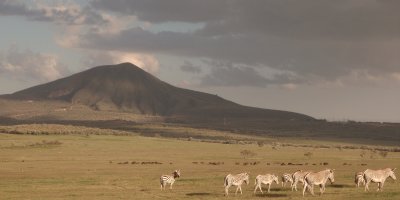 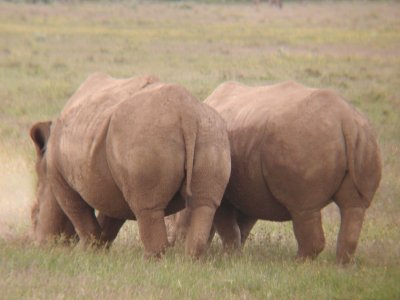 The rhinos and zebra were beautiful but what stole the show was 'Dirty Harry': an ostrich who has the hots for tourists... or just anyone who will show him some attention!

At first I felt a little awkward as I thought someone had dressed up in an Orstrich suit and was dancing for us... how odd.

Worry turned to relief as we found he was in fact performing for his favorite yellow tub.

As we watched him strut off into the distance he came across an unfortunate warthog – who he started performing for – the warty – having seen it all before – ignored the strange giant bird's dancing and carried on nibbling the grass – so a rather perturbed Harry stopped his dance and headed off into the sunset. 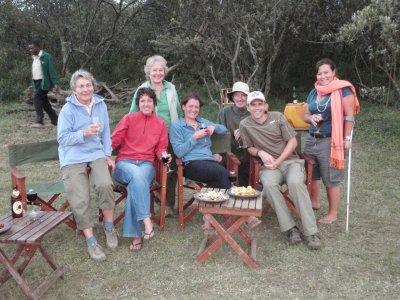 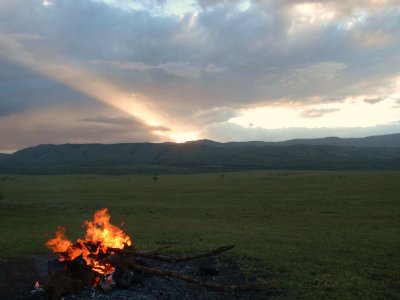 We on the other hand all needed a glass of wine by the campfire to calm our nerves!

Next on the agenda was a trip to Nairobi to get a visa for Ethiopia and essential supplies for the next leg of the trip: the hot “it can touch 50”, sandy “my brother lost his landrover there”, inhospitable “watch out for thee scorpions – they are everywhere” road of Lake Turkana – the largest dessert lake in the world.

The most important items on the shopping list were fishing hooks and line and citric/ascorbic acid based fruit juice powder to make the warm, volcanic slightly brackish and very alkaline water of the lake drinkable – unsure how much to buy as our advise had been “Just keep adding it until the water stops fizzing” “you will probably drink 10 litres each per day.” - we bought all of the supermarket's stock! 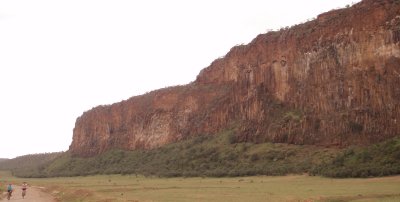 The following day - As an antedote to the traffic jams and hustle of Nairobi a morning ride to Hells Gate National Park was prescribed.

For the afternoon's entertainment Liz had organised trip to a little jewelry making place that also buys baskets from Turkana – Minalyn was struck with horror as we told her our plan to cycle to Ethiopia via Turkana.

“But it's not safe” she objected.
“They all have guns – even the children – my driver got shot in the leg last month... it's too hot and windy - you'll die of heat and dehydration”

It was too late to cover Mum's ears – our relaxing trip to the Jewelry shop – added a few grey hairs to all of us!

After a sad Goodbye to Pol's sister – Beth. Mum and Dad kindly gave us a lift in the general direction of Lake Turkana.

Having spoken to multiple Kenyans about the road ahead - We were as prepared for the challenge as we ever would be. Bikes fixed and tested. Extra water carrying capacity – now 29 litres. Energy bars, sun cream, dried mango, fishing stuff and water neutralising ingredients.

We couldn't help some trepidation creeping into our hearts after all the hype – but not as much – I fear - as poor old Mum and Dad who did look rather worried as they headed away in the car.

Great entry.. hilarious! brilliant drama building with the description of ethiopia (much like all the reports we heard) sounded really hardcore, until the mention of a dessert lake...now would that be angel delight, or banana custard? glad you guys are safe. x x x