Ethiopia - will we cope 'ere?

The Omo Valley - a step back in time

We are no longer Mzungus. We are now Feranji – foreigners, which is nice, in a way. But actually we don't even hear that very often as the greeting for visitors here is “Hellund”. It is repeated in quick succession many times and punctuated with the occasional “OK”, “Hello” and “Hullo”. So it goes something like this:

For a while we were just very confused but eventually we figured out it had something to do with Highland mineral water and the plastic bottles it comes in. At least this is what we have concluded, although the brand of mineral water available here is actually called Abysinnia! But then when we first cycled into Tanzania, the only country we had been in with no English, and Swahili as the national language, we became very frustrated with the children shouting “Haribo” at us all the time as we thought they were demanding Haribo sweets from us. As it turned out what they were actually shouting was “Karibu” - Swahili for “Welcome”!! So perhaps we should assume that “Hellund” is amharic for “Welcome!” and then I think we will have a much nicer time!!

We entered Ethiopia in the South West corner of the country. Heading up towards the border from Todenyang in Northern Kenya we were extremely happy to have GPS. Not wanting to inadvertently stray into Southern Sudan we literally set the GPS on a bearing to the first town in Ethiopia and followed it in a dead straight line across the desert! 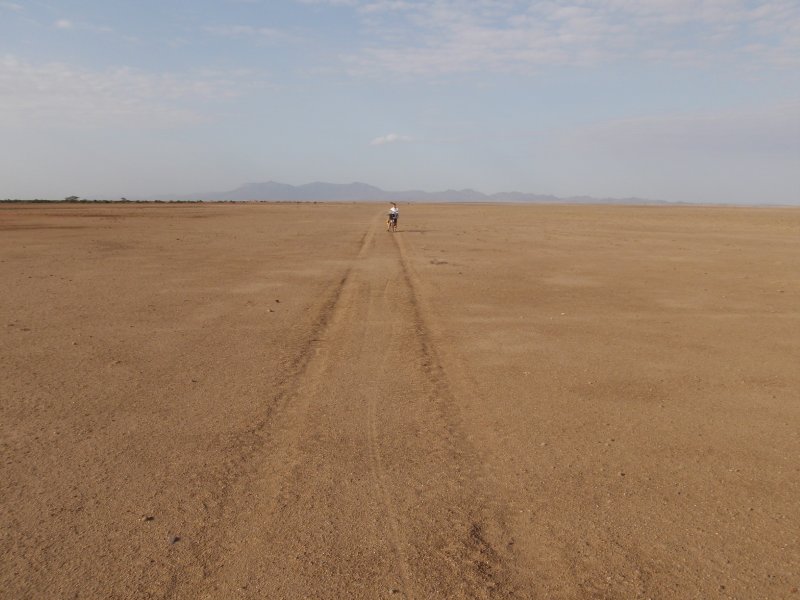 Kenya behind us, Sudan on our left, Ethiopia ahead of us – not quite sure which country we were actually in though!!!

The River Omo is the obvious physical boundary between Kenya and Ethiopia and we took the “ferry” across happy to then know that we were in Ethiopia. 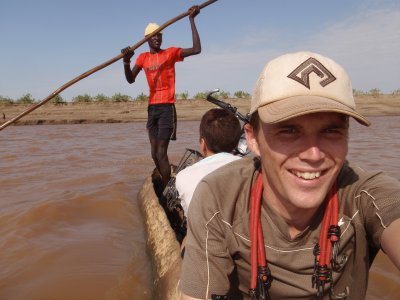 Having heard we would be practically unable to move for all the people in Ethiopia we were pleasantly surprised by the scenes that greeted us on the other side of the border. 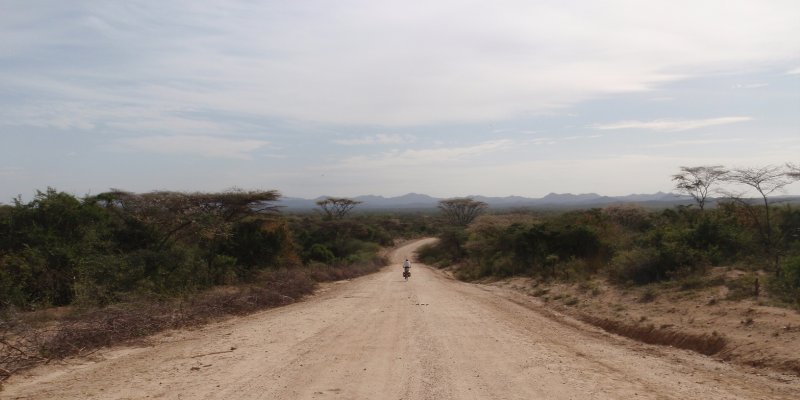 This area of Ethiopia, the Omo valley, is known as “the peoples region”. The people of the many different groups here still live and dress in a very traditional way which is distinct among each of the tribes. 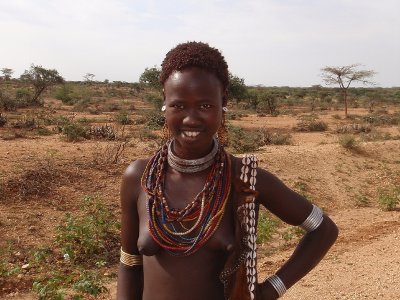 A girl near Turmi

This girl and the lady below are from the Hamer tribe. The bracelets and necklaces are indications of social status – wealth and marital status. I think this girl might be engaged as the thick metal necklaces indicate she is married or engaged but the iron bracelets on her arms would be given to her husband's family at the time of her marriage. The people in this area have no english so it is hard to be sure! 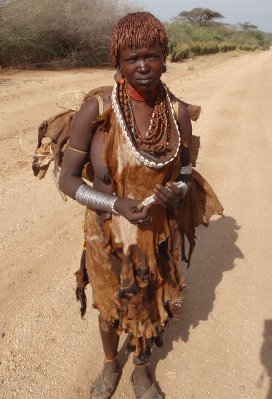 By the way the reason Pol has chopped here hair so short now is so that it didn't end up like this!!!

This part of Southern Ethiopia is very low at only 350metres above sea level and consequently we had a few hot sleepless nights when the temperature just never dropped in the evenings having reached highs in the 40 °C's during the day. On our second day in the country we were pleased to find ourselves climbing to over 1000m and we were hopeful that we would sleep that night but alas we dropped right back down again before bedtime!! 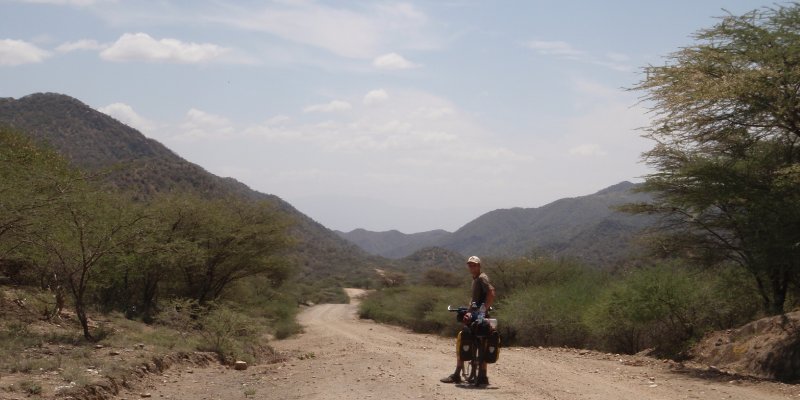 Climbing up only to drop back down......

This photo is of the Omo valley. It is flat like this for a width of about 20-30 km and then there is a matching line of hills on the right bordering the valley all the way along. At a small village just before this we stopped for water. At first we were wary as we caught sight of a group of 10 wild looking boys beside the road. They had remarkably painted faces. In a strip across their eyes, like a mask for a masquerade ball, they had lots of bright white dots interspersed with orangey ocra dots on their skin. They wore just a cloth around their wastes, and a lot of them carried the little stools we saw in Turkana, although they were made in a slightly different style here. The children had barely any English but they were very sweet. We explained we wanted water and when he understood one of the boys said; “OK, no problem, let's go!!” and he led us in the direction of the pump whilst some of the others helped push the bikes over the bumpy ground. 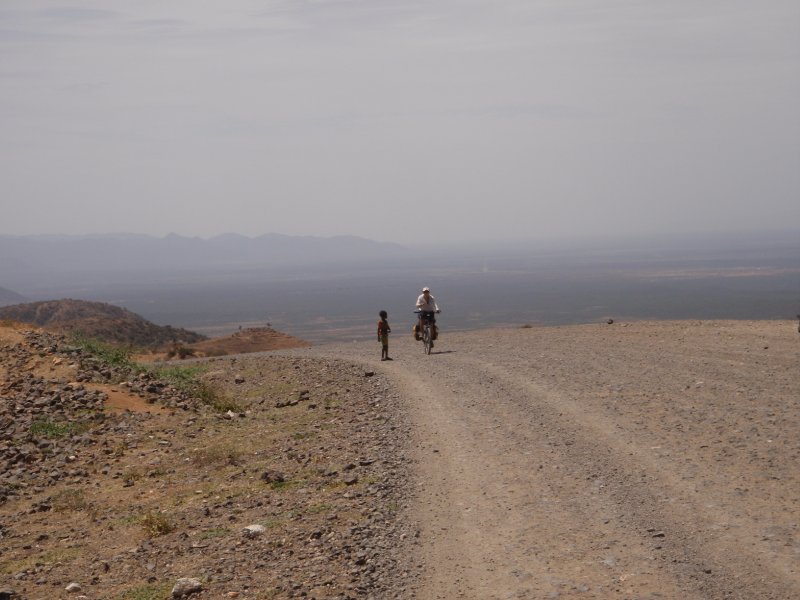 A room with a view!! Looking down into the Omo valley.

Although we were happy to be getting away from the heat with every pedal stroke we didn't always like what we saw ahead of us!! 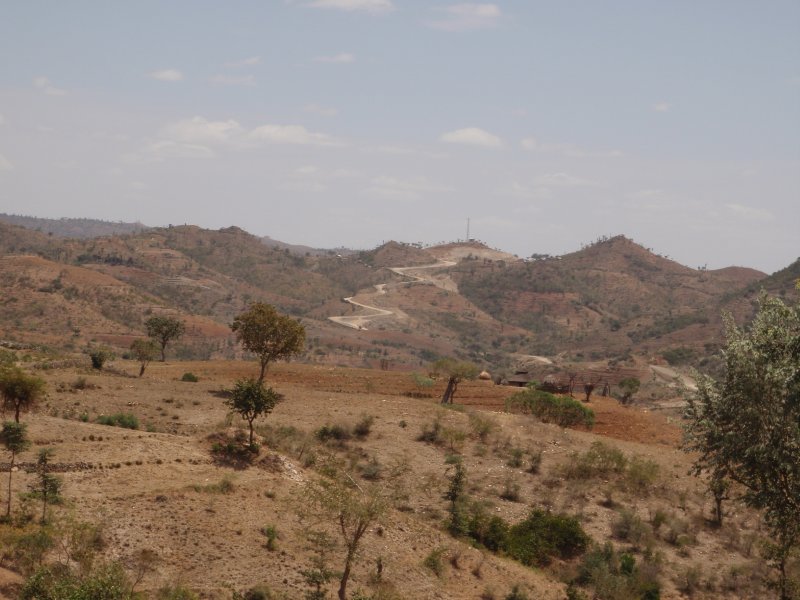 “Over the hills and far away!”

We stopped not far South of Konso for a coke break in a little village. The only place with drinks was the “village pub” - a dark and dingy shed with a table down the middle and benches along the walls. We went in and found all the men of the village downing shots of Ouzo - a large double costing just 40p!! Glass litre bottles stood on the table but when they ran out the teenage girl who seemed to be in charge would set down her illuminous yellow crochet, get up from the corner and refill the bottles from a dirty old 5litre jerrycan stashed under the table!! It was here that we learnt the guy with the gun can be very useful sometimes!!! 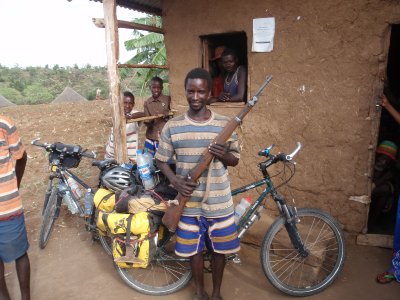 Leaving the village behind we became aware that everywhere we went through between here and Konso the men were sitting around drinking Ouzo – it was 3 o'clock on a Wednesday afternoon!!

Konso marks the end of the peoples region. Happily we arrived here on market day and enjoyed the hustle and bustle that goes with it. 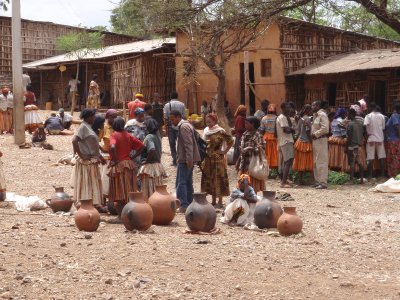 Note the skirts with a frill around the top that all the ladies in this area wear!!

By the time we reached Konso we had earnt ourselves a couple of rest days with lots of reading, typing, sleeping and eating!! 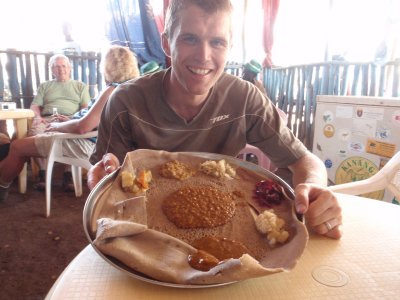 This is the staple diet in Ethiopia; a huge savoury pancake with various toppings on - it looks good but it's actually pretty minging!!

what a very different experience, soo glad you had your GPS in the dessert, also glad you have not melted away cycling up those endless hills, may be you are looking forward to hills now that you are in the Sudanese dessert!! your photos are bril
Well done indeed

any lorries for hill pulls? those pancakes look a good reward a cool beer must be dream we got one at about 9000ft in the himalayers that cost less than in denmark!! daffs great must be over there 10,000 done how many to go?

THANKS FOR THE COMMENTS MUM AND DAD. IS ANYONE ELSE READING THE BLOG?... IF SO LET US KNOW - WE'D LOVE TO SEE WHO'S READING THIS!

What fantastic scenery! Not too sure about the savoury pancake - it looks as though a bird flew over and dropped a donation from a great height.
Best wishes, Brian and Sue

IT TASTES A BIT LIKE THAT TOO!! GLAD YOU ENJOYED THE PHOTOS, THE SCENERY THERE WAS INCREDIBLE,

by Brian and Sue Harder

Just to let you know that I'm still reading and thoroughly enjoying your blog. Your stories are interesting and written in a really engaging way. Keep it up! Best wishes. C x