Highs and Lows in a Land of Crazy Contrast

Ethiopia truly is a country of extreme contrast. It’s inhabitants claim not to be African - yet have lived in Africa since time began. They claim to be the only African (!) country never colonised. But after a convincing military defeat the Italians ruled here for 4 years. Every large town has a piazza. You have the choice between injera (huge pancake) or spaghetti in any restaurant in the country. All towns are equipped with multiple coffee and pastry shops and after you have finished your espresso you will leave with “chao” ringing in your ears.

It is where we have come across the most vile, obnoxious and unfriendly children on our entire trip. After we have given a smile, wave and a greeting ‘Salam’. We have been spat at, had sticks and stones thrown, swiped at with hefty staffs, and had the water bottles stolen off the back of the bikes while peddling uphill. A Slovenian cyclist we met coming the opposite direction said to us “Zey are eevill.. I look in zair eyes and just see eevill”

And you are faced with a dilemma - what to you do when a sizable rock whacks into the back of your head or skims past your ear. Turn the other cheek? Ignore it with the hope that any reaction is exactly what they are after? Chuck a bigger rock back? Or drop the bike - chase and catch the little blighter and make your throbbing head feel a bit better as the child whimpers/cries/screams while being shaken vigorously by the crazy Farangi with his mum in the background (who can sense the White Man is teetering on the edge of loosing control) pleading for mercy.

Rob usually chose the final option, but being a nation of runners he only caught about 1 in 3.

But like I said the country is one of extreme contrast. The memories that will endure are the ones of the feral children. But they are the small minority. Ethiopia is also host to the sweetest, kindest children that we have come across. 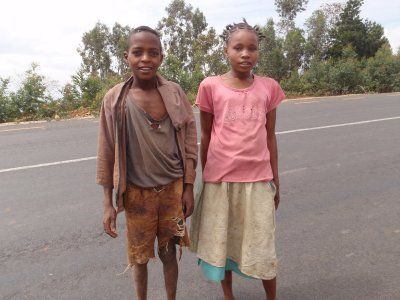 These 2 pushed us up a huge hill and expected no payment. This morning as we rode into town a small child stopped and with a broad smile said “Welcome to Ethiopia”.

Some of the adults have been the most friendly we have encountered. Many trucks/4x4s and even a policeman have stopped to ask if they can help us in any way. The bus conductors will lean out of the door and scatter the children trailing us with the aid of a hefty stick or some angry words. The man below translated for us in a guest house and then insisted on showing us his pharmacy and buying us drinks 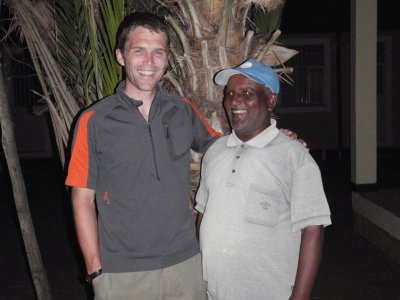 The geography is also only demonstrated in polar opposites. Near the southern border with Kenya we slogged through the heat in the flat bottom of the great rift valley. Temperatures were in the low 40s in the daytime and the nights were spent watching the stars wile lying in a puddle of sweat thinking ‘aren’t deserts supposed to get cold at night’.

However the landscape abruptly changed as we climbed well over 2000m out of the rift. As we ascended the temperatures fell. Greenery and trees started to appear. ‘It looks like it rains a lot here we thought’ and sure enough black clouds gathered and 5 seconds after finding shelter the scenery was pummled by marble sized hailstones.

The following morning we donned our waterproofs (only the second time in the entire trip) and braved the rain a few minutes before dawn. 40 minutes later there was no sign of sunrise or of the rain stopping any time soon and we were chilled to the core - polly unable to flex her fingers well enough to stop on the steep downhills. Seeing an old man sheltering under some corrugated iron in an uninhabited looking village we asked “Chai?” While doing drinking hot fluid mimes. Soon we were beckoned into a dark room with a charcoal stove for us to reanimate our extremities. With steam wafting from our socks and our eyes becoming accustomed to the light we noticed the man in the corner of the room - grinning at us snugly tucked up in bed - we had been welcomed into this poor guy’s bedroom!! 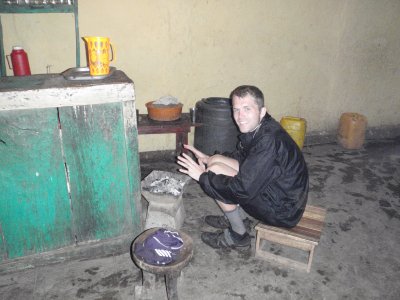 Another incredible contrast hit us as we peddled into Addis Ababa. 80% of the population lives in the rural Ethiopia - where little has changed in the past 500 years.

The fields are still worked by oxen and wooden ploughs: 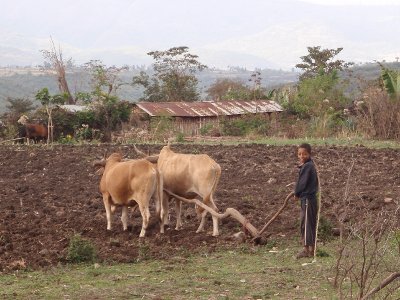 The houses are still made in a traditional style from natural materials: 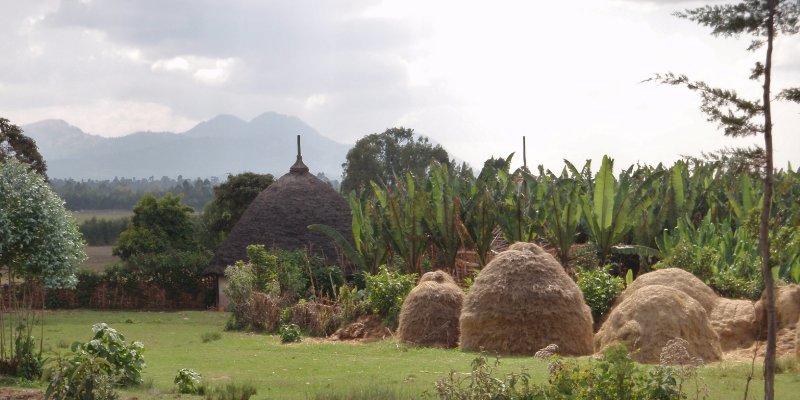 By far the most common form of transport is foot or pony carts and all goods are moved to market strapped to the back of sullen donkeys. 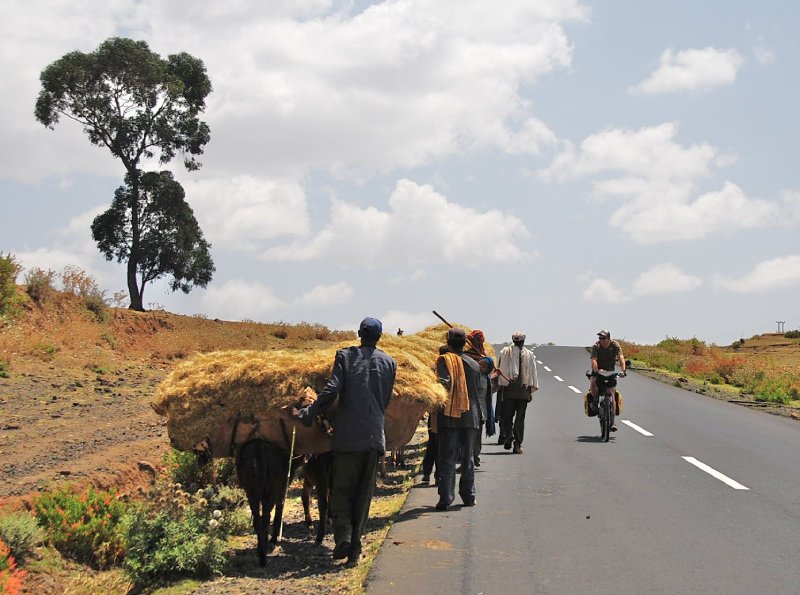 But Addis, on the other hand, is surrounded by ever-increasing suburbs. Sky scrapers dominate the skyline. Shacks with a steaming kettle advertising their trade are replaced by glass fronted ‘Burger Queen’ and ‘Star backs’ selling cinnamon machiatoes to well dressed Amharas. In fact the only thing reveals that it is the capital city of one of Africa’s poorest countries is that 90%of all the 4x4s have World Food Programme/UN/World Vision or the like emblazoned across their doors (In 2003 95% of Ethiopia’s government revenue was aid money). And of course the occasional heard of sheep clogging up the ring road - on it’s way to market 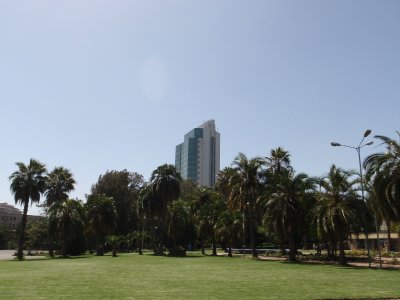 Addis tourists are slightly unusual too. Many of the young white couples walking the streets or sipping coffee are accompanied by their newly adopted child looking more than a little bewildered - a phenomenon we have not seen in any other big African city we have passed through.

We had been looking forward to Addis for weeks, being able to buy a bar of chocolate in a supermarket, watch a film and most of all to stay with friends (well friends of friends - soon to be our friends!). Our first few days were spent staying at Ali’s house - She is working for DFID (British Government Aid organisation). We didn’t realise until late that she had a plane to catch to the UK about 5 hours after our arrival in her house - in those slightly hectic 5 hours she managed to wholeheartedly welcome us and host dinner for us and Esther (Ali’s best buddy and good friend of my sister’s husband - expat Africa is a small world). The next 3 days were spent trying to get Sudan and Egypt visas and using any spare moment to get our fix of Ali’s extensive DVD collection!

Our next hosts were Frank and Ann Rispin- friends of Polly’s aunt. Teachers from our home town who have moved to Ethiopia and are busily starting and running schools. They have 3 under their belt already! 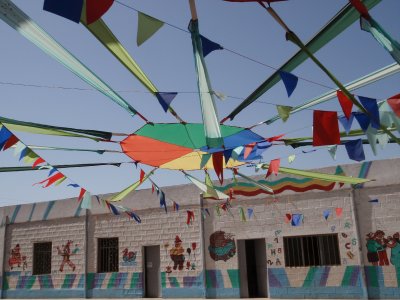 They were incredible hosts. Frank took a day out to guide around the sights of Addis and to top things off we went out for some traditional food and death defying head banging. 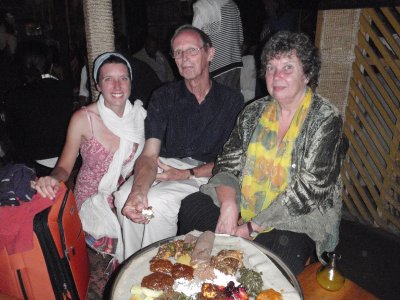 We were very worried that someone’s head was goning to pop off and knock over our beer!

Hi Rob & Pol. Great to hear about your adventures as always. Looking forward to see soon when you get home. Helen x

Glad the Ethiopian children have lived up to expectations. Not sure I could have contained the rage, however I also sure as hell wouldn't have had enough energy to chase after any of them! Was bizaare looking at your photo of Addis...contrasts! Must be the Sudan next then (if geography serves me correctly?)

Met up with Beth and Cat and Helen Bosanquet in bristol last weekend - was good to catch up. You remain very firmly in thoughts and prayers - sorry I've been a bit rubbsish at emailing recently.

Looking forward to the next installment

Yes still following avidly had to catch up with you in Ethiopia.. just been to Mombasa! all sounds amazing njira good and the hot sauce! dickcoppinger will send you contact of friends who cycled through Egypt.such a great adventure better than any travel novel! Keep strong and mingi salaams
liz and Ruli

by Liz and Ruli

Just wanted to let you know that we are reading and loving the blog. It's on our tool bar so every few days we're checking for the updates. Emma and Andy were here for Easter - the 4 of us agreed that you guys are hard core! We have aquired a Roxy and a Monty and are looking forward to the prospect of taking them on autumn walks with you guys.If you stay put long enough after you're back that is...

ROXY AND MONTY THE DOGS? LOOKING FOREWARD TO SEEING YOU GUYS. WILL PROB MOVE BACK TO CARDIFF. YAY!. KEEP 17TH JULY FREE. PARTY AT POL'S HOUSE!

P.S Mrs old lady Raleigh is getting lots of outings in the park!

by Sophie and John

Loving reading your story - it's really amazing!! Everyone here in Vancouver talks about cycling across Canada, but it really just doesn't compare to what you're doing. Totally incredible!

CAN'T WAIT TO CATCH UP. WILL BE HOME END OF JUNE

Hi Rob,
Just to say keep up the good work, both on the bike and with the blog, Gem and I are reading it all the time - fascinating.

Looking forward to catching up with you when you're back, or with a bit of luck somewhere in Europe enroute.

Hey guys! Site looks great! We just got back from Ethiopia last month and are now working with the footage for the documentary. You can check out our videos at www.themapmakers.org

Cheers and best of luck with the rest of your trip...keep us posted!