A cruise accross the Ethiopian Highlands

We were thoroughly refreshed and revitalised after our time in Addis Ababa which was just as well since leaving the city meant a day climbing 2000m as we started out up the northern escarpment. As we left behind the morning city rush we passed many laden donkeys making their way into town with fodder for the city livestock and fuel for the many coffee makers, in the form of piles and piles of dried-out cowpats! As our altitude increased we found Ethiopia's strongest and fittest rigorously training on the high ground and up the steep slopes. Both cyclists and runners were out in force covering the ground at great speed. After the ascent the land stretched out on all sides and we were surrounded by pasture dotted with homes.

A day's cycling took us to a vast gorge dropping down to one of the tributaries of the Blue Nile - the perfect spot to spend the night. 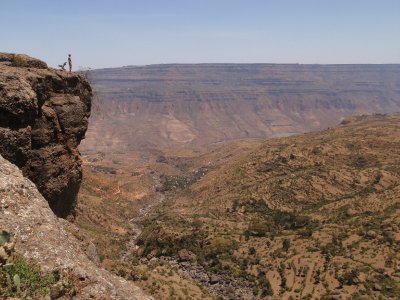 The following day we continued to climb and although we reached our highest point in Ethiopia the climbs were a lot less severe than they had been the day before. 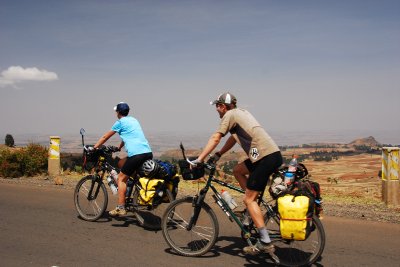 Our number increased again when we met a fellow cyclist, Graydon, heading our way. We were on route to Bahir Dar on the southern shore of Lake Tana. We had not only many kilometres to cover but also the Blue Nile gorge to traverse. The gorge is a traditional tribal boundary and it is easy to see why when you gaze down the drop of 1500m over 20km. The drop is mirrored by the climb on the other side of the river. 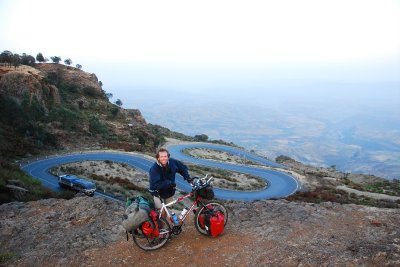 Feeling high at the top of a 20km descent, Graydon aka the HGV

Our first glimpse of the Blue Nile as it winds its way from Lake Tana into southern Sudan before joining the White Nile in Khartoum.

We punctuated the beautiful scenery west of the Blue Nile (as elsewhere in Ethiopia) with plenty of stops to drink coffee and eat oodles of spaghetti, a few evenings listening to Graydon strumming tunes on his guitar (he doesn’t travel light) and hearing about his many adventures on his various bicycle travels throughout the world, and of course the inevitable emergency breaks whilst Graydon or Rob vanished over the horizon accompanied by the tortured cries of a small, very badly behaved child. There was also the occasional awkward stand-off with significantly larger, equally badly behaved boys!!! We also had an amusing mis-understanding whilst negotiating the price of a room the night before we reached Bahir Dar. Graydon had asked the price and been told 25 Bir. We decided we would stay and take a room each since they were very small but the girl then said the price was 45 Bir. We argued for some time; her insisting it was 45Bir, us annoyed and insisting the total should be 75 Bir since she'd told Graydon 25 Bir per room. Eventually we realised that 45 Bir was the total for 3 rooms - 15 Bir (70p) each - and 25 Bir was the hiked-up price so we had been trying to haggle the price up!! Happily we accepted the rooms and slept very soundly. 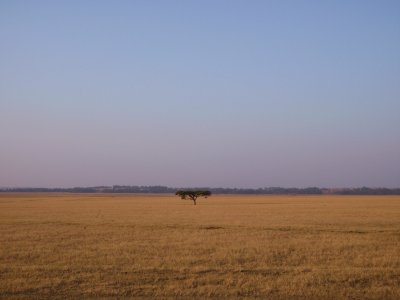 Views between the Blue Nile gorge and Bahir Dar: 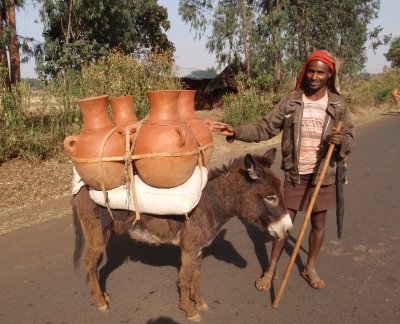 He was one of a troop on their way to market. He was quite anxious that we were taking too long taking the photos and ran off to join his friends as soon as we'd finished. 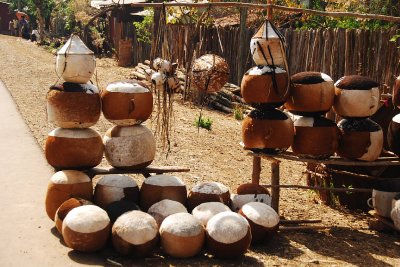 Uniquely Ethiopian wares. The balls are stuffed rigid with shredded sacks and make a comfy portable stool (a lot heavier than Rob's little wooden Turkana stool) and the pointy things are picnic baskets used for taking your injera (savoury pancakes) into the fields with you. 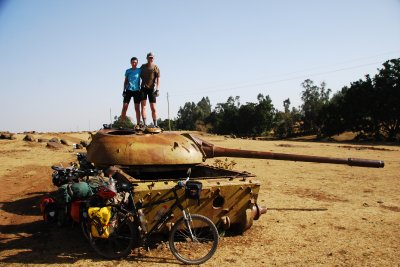 Remnants of the war, a Russian tank. 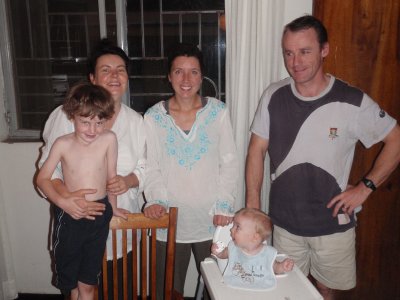 Bahir Dar was everything we'd hoped it would be with it's palm fringed streets and innumerable fruit juice bars. We drank a lot of juice!! We couldn't quite bring ourselves to try the strange murky green juice which we kept on seeing everyone drinking and we were quite relieved we didn't when we discovered it was avocado juice - yuk!!

On the water's edge we spotted countless varieties of exotic birds including hoopoes and lovebirds whilst we watched the numerous pelicans float by.

Rob visited a branch of the famous ‘Fistula Hospital’ with our host Dr Andrew who runs the unit.

Well over 80 million people live in Ethiopia, most of whom reside in hugely remote areas with few healthcare facilities. Consequently if a mother suffers obstructed labour she and her baby will most likely die. If she survives she will be left with a permanent connection between her bladder/rectum and vagina (Fistula) from the immense pressure exerted by the dead foetus’s head over several days. This trauma will leave her not only suffering the stigma of having been unable to deliver a live baby but also with the horror of incontinence in a society where water is rarely available for luxuries such as washing.

The hospital provides a the utterly life changing procedure of fistulae repair with a success rate (return of continence) of 95% in combination with education (healthcare, numeracy, literacy, theology) rehabilitation and a new clean dress to return home with.

Graydon greeted us very excitedly one evening when we met up for some delicious pizza. The cause for his excitement turned out to be a very sturdy, solid wooden stick that he had purchased at the market. Swept along by his excitement we were never the less slightly bemused until he clarified it's purpose with a little demonstration. "look, look" he said. "If I keep it on the bike I can clear a good space all around me when the kids come" - he swung the stick around him from side to side causing a few of the waiters to jump out of his way.

We were never to witness the impact of the wooden stick as our paths parted at Bahir Dar. Graydon pedalled on after a single day's rest whilst we waited a day longer to fit in with the weekly ferry. 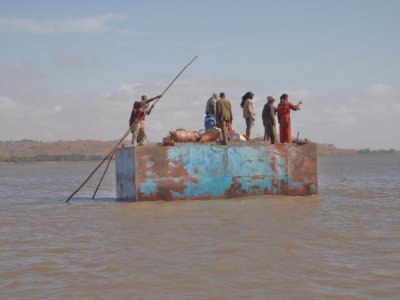 This looks like it fell, quite literally off the back of a lorry! Thankfully it's only used for loading and unloading the ships cargo!! Our bikes were spared the ordeal since in Barhir Dar at least there was a jetty for the ferry to moor to and we were able to walk straight on. 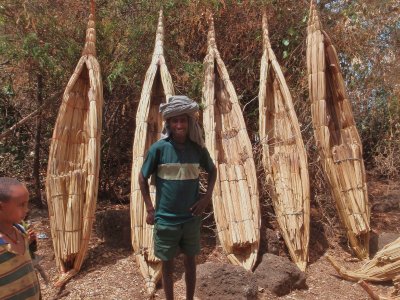 Papyrus fishing boats!!! Skill-fully constructed at very little cost it's a brave man who dodges the hippos on one of these. Allegedly it can carry a cow with ease although we didn’t see any cows floating around on them so we have to take his word for it. 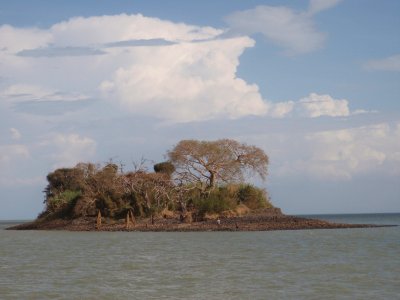 We passed many little islands and stopped off at one on our way to stock up on fish. 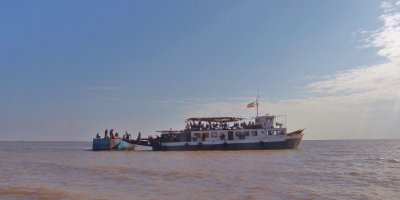 Arriving in Gorgora on the northern shore we clubbed together with one of the other passengers to stay in a 3 bedroom lake view house at the port hotel since the price was the same as for two rooms!! The views across the waters, particularly at dawn, were stunning. The house was the holiday home of the former communist president Mengistu, the dictator who instigated the “Red Terror” in which thousands of Ethiopians were killed. We slept in his bed! 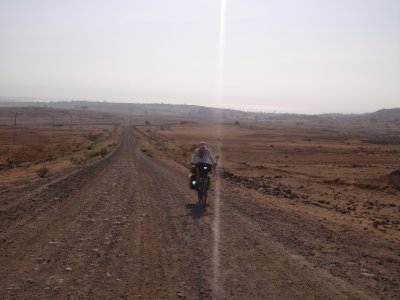 A day on the bikes from the Lake took us to Gondar. 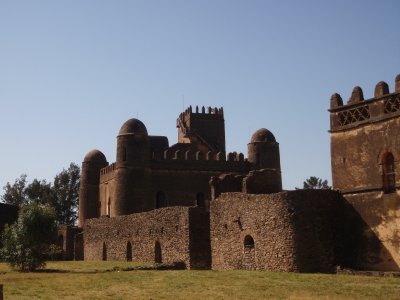 Gondar; Africa’s Camelot was a mixed bag. It has some well-preserved castles from the 1600’s and some elaborately decorated churches from the same era. 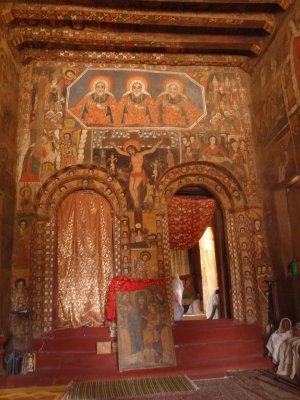 But as a tourist in Gondar you can be sure that wherever you go and whatever you do there’s someone not that far behind who wants something from you, and they’re watching you..... 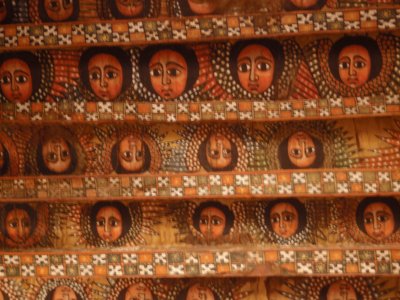 Many many greetins from Shyira-Hill! It's still so interesting to read your blog- I love it! I just wanted to tell you, that I finally oved into the Châlet. Yeah!!! It's really so much nicer than living in the apartment - alone again, after my two last firends left me again too. It's also crazy to see that I'll be gone in three months again... But until then I enjoy the Châlet and can have a little more quiet time there and prepare myself for good old Germany...hahahahaha are you still in time to go back?
I'll keep track on you guys and we'll keep praying for you here!
Much love, Miri

@polly: I just love your family: I got a package from Beth and your Mum- with fair-trade chocolate!!! I love it! :D

MIRI!!! ENJOY THE CHALET!!! WE DID, IT'S SUCH AN AMAZING HOME. WE ARE SORT OF ON TRACK BUT WE ARE HAVING TROUBLE FINDING A WAY TO GET FROM EGYPT TO EUROPE - EVERYONE RECKONS WE HAVE TO GO THROUGH SYRIA... WHICH WILL PUT US WAY OUT ON OUR TIMETABLE.
LOADS OF LOVE XXXX

More stunning [photography showing us the magic of africa and now you really are in top condition how manykilometers so far?! amazingwell done and keep going and enjoying . think of you lots
Liz and Rulixx

THANKS GUYS!!! I THINK YOU ARE OUR BEST BLOG READERS... WE THINK OF YOU BOTH OFTEN TOO. WILL BE GREAT TO SEE YOU IN THE IN THE SUMMER :0)

by Liz And Ruli

Wow, Rob and Polly I absolutly love reading your blog. it is just so full of life, breath, adventure and a trip of a life time. Im sure life will not be the same after this... Your photographs are absolulty incredible and are well worth publishing. Keep it up

Much love and prayers, Lottie (far away back in South Africa!)

PS. Nico and I are heading up to Mseleni next week to see everyone before heading to Mozam for a holiday. Back to where your photos of the start of the long way home were taken... that was also a long time ago now! Wow! x C

Hey guys
Just to say hi and that I love your blog - I'm a religious follower of your trip! Sounds fabulous, am highly jealous of all the places you're seeing if not of the cycling. Thanks for the invites to the welcome home - won't be there but will be back in Sept so would be great to have a mseleni reunion then - suggest sept 7th in bristol?! Claire xx