Halfway between the convergence of the waters of the White and Blue Niles in Khartoum and their fusion with the waters of the Mediterranean at the delta in Egypt the waters bulge, forced over their banks, pushing far into the desert beyond as they jostle, fighting for a chance to make it over the wall of the high dam in Aswan and continue their journey to the sea. 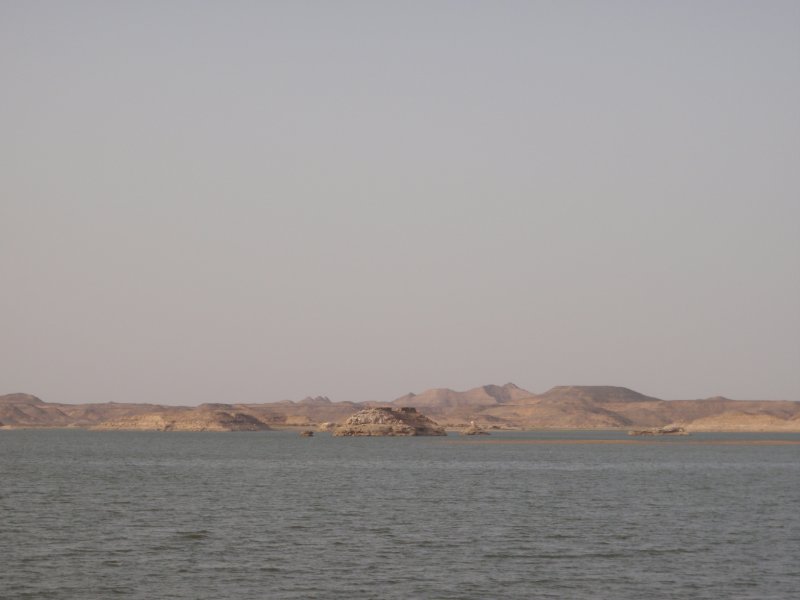 The deep blue waters of Lake Nasser sit in the middle of the desert bordered by rocky peaks and hot sand, veiling the border between Sudan and Egypt. A weekly ferry gliding between the upper and lower shores provides the only link between the two countries and consequently we hurried our bikes through the desert to reach the Lake in time for the Wednesday departure. The idea of missing the boat and having to sit out the week on our already expired visa in the sleepy town of Wadi Halfa did not appeal.

Making our way into the “ferry terminal” we were pleasantly surprised to find a well organised, spacious, air conditioned building. The formalities of extricating ourselves from the country were overwhelming but thankfully a friendly and very professional Sudanese employee guided us expertly through. Having processed all the paper work we got ahead of the crowds on the shuttle bus by bombing down to the boat on our bikes and we managed to secure a perfect position on the top deck sheltered from the scorching sun by the lifeboats. 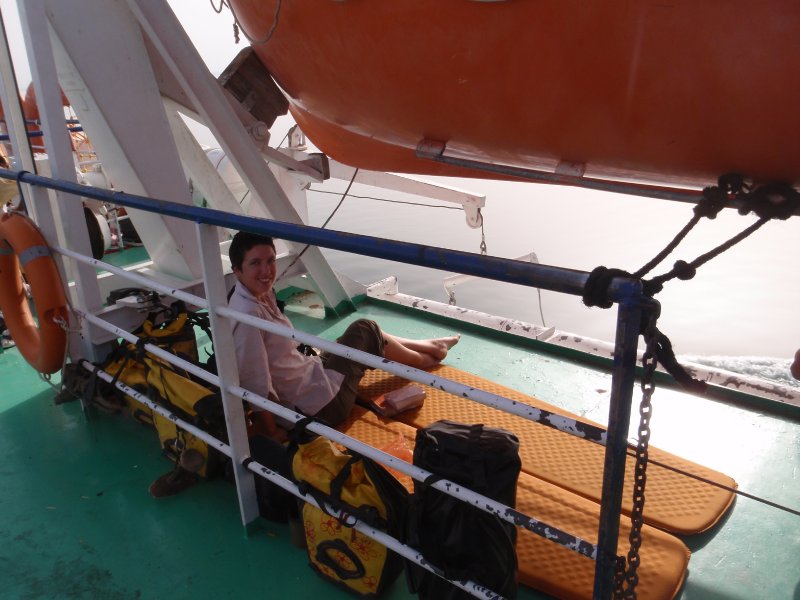 We really appreciated the shade as we then sat on the deck for six hours before it set off on the 18 hour crossing. There was plenty of time for reading and making new friends. 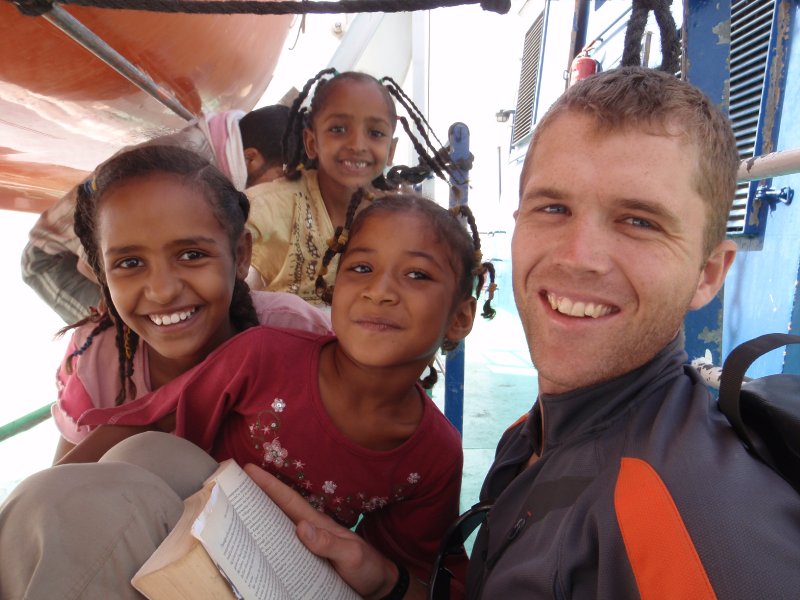 These Sudanese girls were on their first trip to Egypt from their home in Khartoum.

Eventually everyone was on the boat and we pulled away into the open waters. At one point we were quite alarmed when all the male passengers congregated on the top deck to face Eastwards and pay their respects to Allah. We were a bit concerned the boat might topple!

After a stunning sunset we sailed passed a flood lit Abu Simbel on the Western bank. The huge temples carved into the cliff face had to be relocated piece by piece in the ‘60’s when the dam was filling up to save them from being drowned. 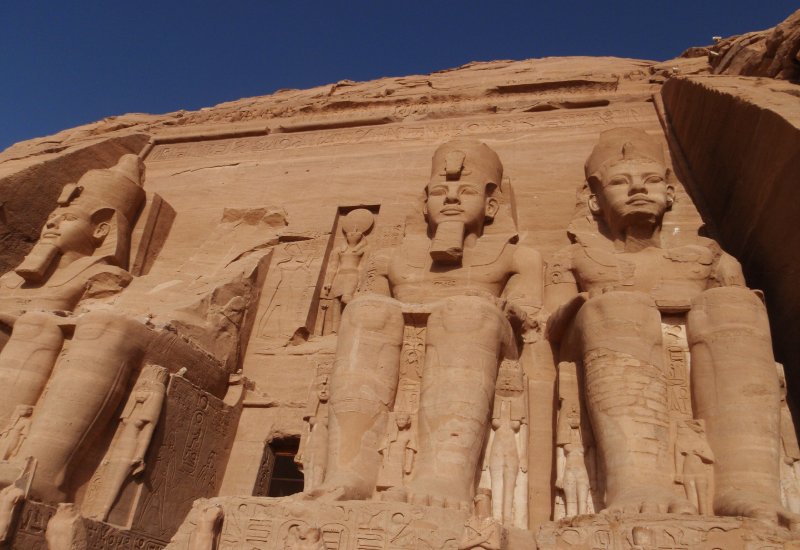 Arriving in Egypt at the North of the Lake things were not as stream lined as they had been in Sudan. We first had to idle in the waters whilst a boat drew alongside and 2 customs officials came aboard to scrutinise everyone’s passports. When they were done we pulled into the port and slowly the boat emptied as everyone was channelled through the very small exit. We popped off the boat and pedalled up the hill to get to the front but it was pointless. We turned right at the top of the hill, channelled by the tall metal fence, to see a huge crowd of people. We quickly found what looked like the end of a queue and joined it. We were completely enclosed by a tall metal fence in which there was one small gate which was being held resolutely shut by an official on the other side. Nobody was moving, though everyone was pressing forwards against the gate trying to get through. We stood next to our loaded bikes resisting the intermittent surges from the crowd by blocking the people pushing passed with our bikes. Standing in the full glare of the sun the heat was unbearable. We were sweating profusely and I was beginning to feel faint. Agitated children were fidgeting and babies began to cry. All the while no-one was moving either way through the gate. Looking around I saw a sign attached to the fence; “Arrivals Compound” - very appropriate I thought, like some sort of torture compound. 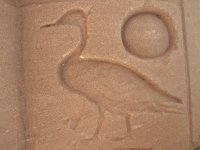 The gate was so small that we began to wonder if we would even fit through with our bikes when the time came and we were allowed to pass. It seemed that others were having the same thoughts as people were pushing forwards with all their luggage to the fence at the front where the men were helping each other lift the suitcases and boxes up and over the fence. We watched incredulously for 5 or 10 minutes. Why are we shut in this compound unable to go anywhere. Why are we being held here for security and yet people are chucking their luggage over the fence and no-one is battering an eyelid. Why don’t we chuck our bikes over and cycle away. Away from the sweating crowd and crying babies, away from the compound. We can’t. We’ll never get away with it. We can, we might, we should!!! So we did. We went over to the fence and unloaded the bikes. Pol managed to slip between two of the upright bars so she was on the other side and could receive the bags from over the top. Then the bikes. The very heavy steel framed bikes. Rob managed to lift them up one at a time until they were resting on top of the fence and then slowly he tilted it down so Pol could grab the wheel. It was not easy. The second bike got over and then Rob climbed over. We were out. We were FREE!!! We loaded up the bikes and prepared to speed away and through the gate. But then an official came over.
“No, no, this is wrong” he said.
“No, no, THIS is wrong” Rob said, gesturing at the heaving crowd. “Why are we waiting. We have been waiting 4 hours. We have a visa and a stamped and our passports have been checked.”
How were they so unprepared? The boat comes through on the same day EVERY week. “No” the man said “you cannot go.”
“Yes we can”.
“You cannot go. We will arrest you.”
We didn’t believe him and we were considering calling his bluff. Then a white guy who had been standing watching from beside his 4X4 piped up; “They will.” he said “They’ll arrest you. Did it last week to some guys who climbed over. They’re still in the cell. Had to stay there for a week.”
Interesting!! A very timely interjection. We back tracked a bit. Could we just walk our bikes and all our luggage back round then to save us lifting everything over the fence again?
“No. You cannot go any further. Go back. Go back.”
The entrance to the building was 15metres behind the guy but he was adamant that we would go no further. We looked at each other exasperated and once again unloaded our bikes. Bungies off, bags off. Pol through the gap. Bags up and over, bikes up and over. Rob over. Back in the compound. EXHAUSTED 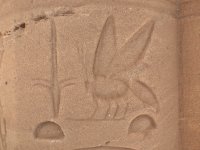 When we eventually made it through the gate we had another surprise in store. The angry official who had accosted us earlier saw us coming and rushed over to security. “These ones. These ones” he said. “Check them. Check everything. They were trying to run away.” With that our fate was sealed. Bungies off the bike, bags off the bikes. Bags open, bags emptied.

It had been an 18 hour ferry ride - 18hours on the water moving. The whole transition however had taken 28hours. 6 hrs waiting for the boat to leave and 4 hrs getting through customs on the Egyptian side. Apparently we did quite well!!

It was a short 20km from the ferry through the desert to the town of Aswan and we arrived there in the evening and found somewhere for a good night’s sleep. We were immediately struck by how much wealthier Egypt is than Sudan as we cycled into the fully developed town - a huge contrast to the little towns we had passed through along the Nile in Sudan.

Feluccas - local sailing boats cruising along the Nile at Aswan. 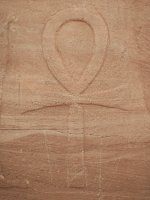 relax there will be carlows ice cream when you arrive

Still with you what a wonderful trip .
Lots of love liz and Ruli

by liz and ruli

That border crossing sounds pretty awful! Looking forward to catching up with you guys sometime soon?!? We have just had a new baby boy Edward - thought u might like to know

lots of love to u both jon, katy, william, edward & puff!

Hi guys, you are amazing! So proud of you both. I LOVE reading all your stories and looking at your beautiful photos. Your photographic skill has improved throughout the trip and you are capturing some absolutly beautiful sceans. Thank you for sharing them with us all. Love to you both, Lottie (In Cape Town

Hello from Holland! We met you at the sigtseeing point in Mitzpe Ramon in Israel. We like to read your stories and we hope you'll have a safe journey back home. Maybe we'll once see you in Holland?! G´d bless you!
Greetings from all of us!

by Paul and Irene Olde Kalter

I stumbled across your blog while surfing the net looking up various cultures. The most I have travelled abroad was to Europe. However, I have truly enjoyed reading about your experiences while travelling. Be safe and have fun!!!

Rob and Pol:WOW! PHILIDELPHIA! THE ADVENTURE IS NOT OVER YET, STILL A LONG WAY TO ENGLAND!