Land of the Pharoahs

After a daytrip to see the awe-inspiring temples of Abu Simbel on the banks of Lake Nasser and a visit to the beautiful Phillae Temple, which involved some hard-nosed negotiations with a boat owner since the temple is on an island, we crossed to the west bank of the Nile and headed North. 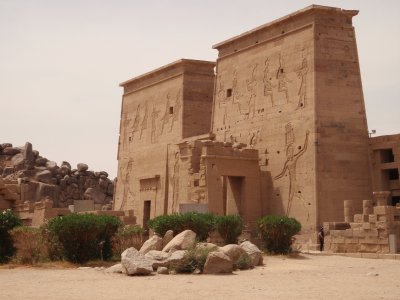 We had not been looking forward to Egypt. Everyone we met travelling North-South terrified us with horror stories of being robbed hand over fist, of children hassling travellers and men exhibiting inappropriate behaviour to female travellers. Our experience on arrival in Egypt where we were held in an arrivals enclosure for hours on end and an incredibly frustrating interaction whenever we wanted to buy anything in Aswan added experience to our bias. 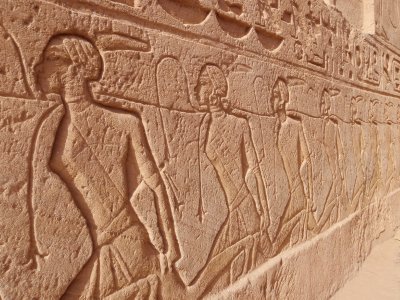 A memory of waiting in the arrivals compound on arriving in Egypt.

But then we crossed over the Nile and cycled along up its’ west bank and we discovered a wonderful world full of kind, generous people living their lives where the tourists never go. 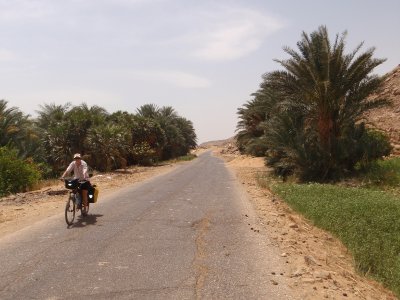 The West Bank - not at all touristy

On our first break we slipped into an orchard of date palms by the edge of the Nile to find some shade, carefully avoiding the neat rows of fresh green vegetables as we went. We hadn’t been there long when a young man approached us on his snowy white donkey. He spoke no English but he conveyed to us that it was his land and we were very welcome. He invited us to pet his donkey and go for a refreshing swim in his stretch of the Nile. Sensing from us the resistance that we had acquired as a result of being all to often lured into seemingly friendly gestures which ended up with a hefty price tag he reassured us earnestly; “No backsheesh, no backsheesh, it’s OK.” (Backsheesh meaning money and being the word the touts cry at you after posing and begging you to take their photo!!) 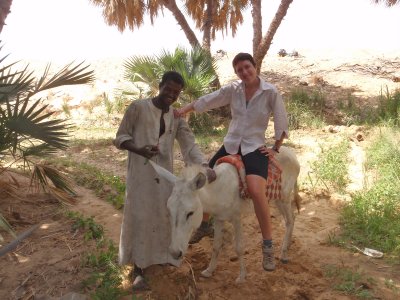 Our next destination was Luxor with its’ wealth of temples and tombs. The journey there was a pleasure. We were pedalling along a beautiful tarmac road which weaves it’s way through the agricultural belt passing back and forth over the ingenious network of canals to which the lush vegetation owes it‘s existence. I was ahead of Rob until the rumbling of a tractor intensified, passed me and died again. When the whisps of sugar cane from the tractor’s trailer blew passed me and out of my vision I saw Rob pedalling along at an impressive speed in the wake of the trailer. “Unbelievable” I thought to myself self-righteously, with perhaps a touch of envy, as I pedalled hard against the wind and he sailed into the distance “A dead-flat, tarmac road and he’s cadging a tow!!”

We then saw two more sugar cane tractors approaching in our wing mirrors.
“You take this one. I’ll take the one behind” said Rob.
And we did. It was incredible. I never would have believed what a difference it makes. We spent the next two hours pedalling hard behind the tractors which kept a very steady 30km/hr. We did have to dodge the odd stick of sugarcane which came darting off the trailer like a spear but when the tractors pulled off the main road and we had covered 60km in 2 hours and were only a stone’s throw away from Luxor we definately thought it was worth it. 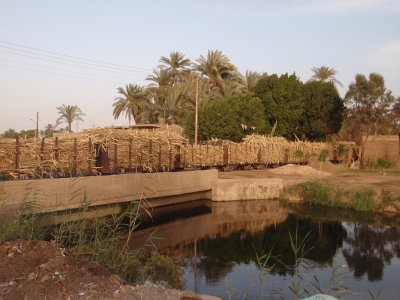 Luxor was incredible. We spent a few days in absolute disbelief as we visited some of the many ancient places there. We were amazed not just by the extent and quantity of the ancient architecture, it’s age, it’s beauty, the intricate carving but also by how much of it is still in tact and how much we can learn from the work of the archeologists and the texts that have been found about the Egyptian empire, the daily life, their religion and customs. 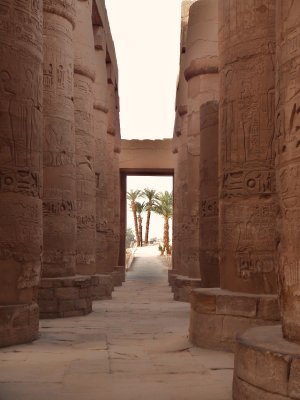 After visiting the massive Karnak temple we felt rather foolish as we recalled a conversation with some travellers we had met in the border town of Wadi Halfa in Sudan. They were entering Sudan, we were entering Egypt. We had told them about a very remote temple remains which had impressed us greatly and insisted that they must go out of their way to visit it. The temple we were describing had no more than a handful of standing pillars which we had found incredible. Karnak temple covers an area of about 4 square kms and has perhaps even hundreds of huge standing pillars and a couple of enormous obelisks!!!! 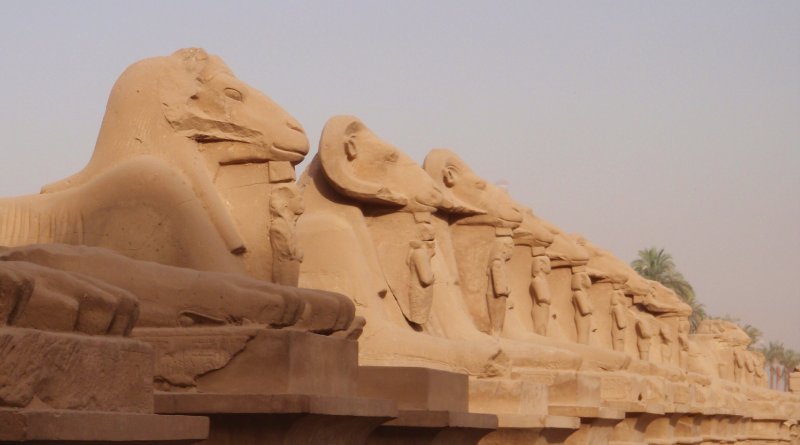 The main entrance to Karnak temple, rams showing the way.

Leaving Luxor very early one morning our attempts at making good progress before the heat kicked in were thwarted when 25km into our day we hit a police road block. Politely but firmly they forbade us to pass. We earnestly explained where we were heading. Knowing that the security on the west bank was very tight we had cunningly picked a temple, Abydos Temple, to say that we really wanted to visit in an attempt to persuade them. We could see that they regretted being unable to let us through but never the less they were resolute so we turned around to back track the 25km - a 50km detour!!

Although disappointed at having lost our early start we were pleasantly surprised by the East bank road. It was very quiet and beautiful. The tourist traffic heads east at luxor and travels to Cairo via the Red Sea - they are banned on the Nile roads for this stretch of the river. At least they had been until last year. We even found a "Sudan-style" lunch stop where we joined a couple of lorry drivers for bread and beans served with sliced tomato and raw onion. 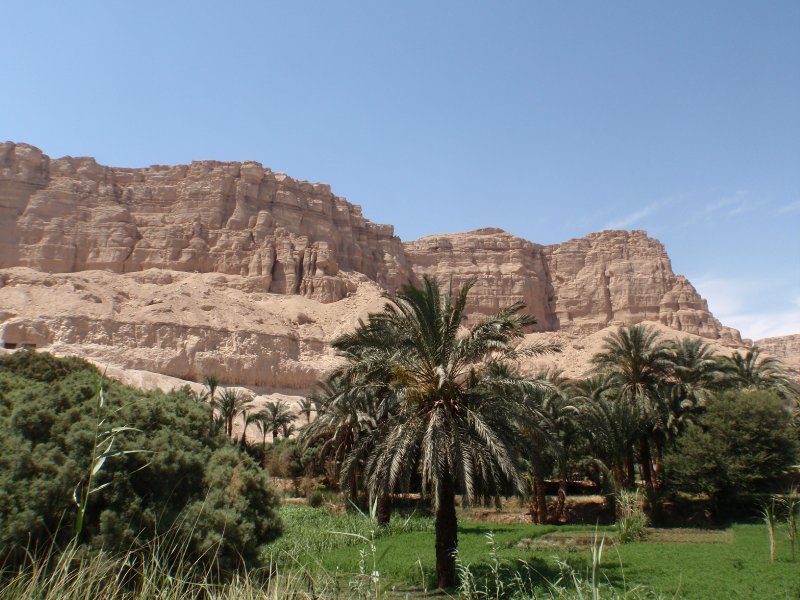 Convinced by our own performance at the road block earlier in the day we decided we would go via Abydos Temple. We headed over the river and sped along the West bank as it was beginning to get dark. By and by we hit another police block. We attempted our usual "smile and wave" strategy but we were stopped in our tracks by a man holding a very big gun. He wouldn't let us pass and we didn't know why. He was unable to explain to us. We had no arabic and he no English. Men gathered around, many of them with guns, each one attempting to communicate with us. It was a little scary. We had to wait for something but we didn't know what.

Eventually it became clear. A police van pulled up. A couple of officers jumped in the back and they beckoned us to follow. Our first police escort!! It seemed pretty exciting. We were quite pleased as we didn't know exactly where the guest house at Abydos Temple was and we figured the police would take us to the door. Alas it wasn't to be. 10km before the guest house they abandoned us because they wanted to go home which was in a different direction!!! Hence we fumbled around in the dark for the next hour until we eventually found our way to where we were staying!! 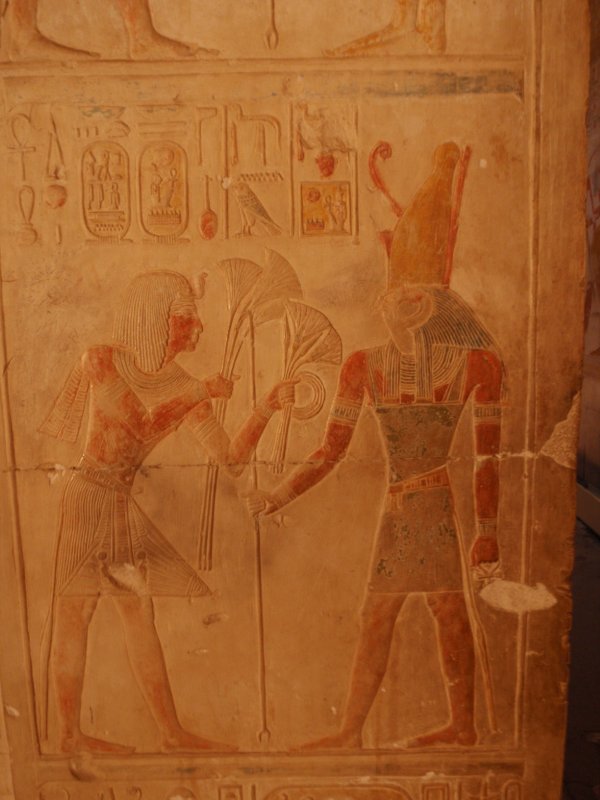 The next morning we took some time to look around the temple. It was very beautiful. We were the only visitors and a lovely dutch lady staying at our guest house showed us around. She knew a lot about the temple and made our visit very interesting. 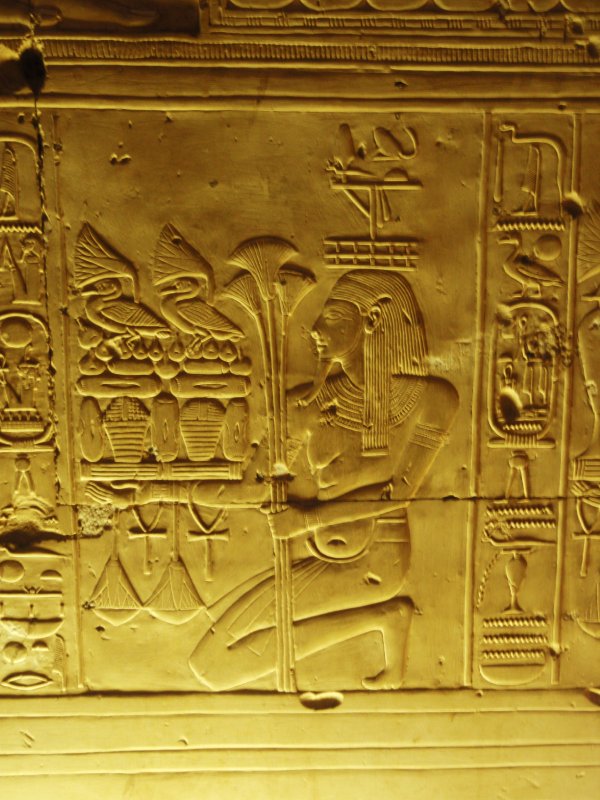 The godess of the Nile and of water.

Hairy, scary, wary yet merry. What fantastic risks you take at times; but well worth the payoff! Hope you don't become bored after leaving Africa. Envious with vicarious joy from your sharing this journey through places I'll never get to this time around. Too old, too poor and too damned lazy to do anything about it.

May you enjoy the best of the best all the way home. Co mucho gusto, Ron

by Ron in Vancouver BC

Home straight now.....doesn't seem so long ago I was sitting in your lounge in Mseleni telling you what an utterly ridiculous idea this was....how very wrong I was!

Keep going - thinking and praying for you both as always. Can't wait to see you back home soon

Wow what a trip! Your diary has made brilliant and exciting reading and the photographic support has been quite excellent. Ishall miss the regular installments. No doubt after a short rest you will find another great challenge , details of which to enthrall us. Well Done. Dick