Abydos temple really was something special. We were not planning to look around as there is such a plethora of ancient monuments in Egypt and we were starting to get the feeling 'seen 1 temple, seen them all'. however our lovely Dutch hostess - Yvonne - at the 'House of Life' adjacent to the temple was amazed that we would come so close and yet miss 'the most incredible temple in Egypt'. 'It is a place of supreme energy... i'll show you around!'.. it was an offer that could not be refused! 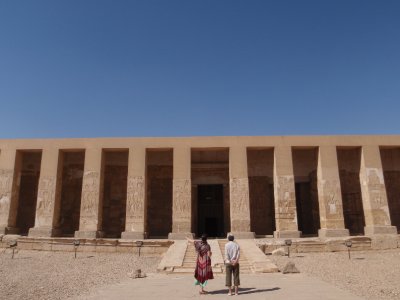 The temple was incredibly intact - it had been built to last 4000yrs - although it had benefited form some 1950s renovation - it seemed that almost all of the structure was original. 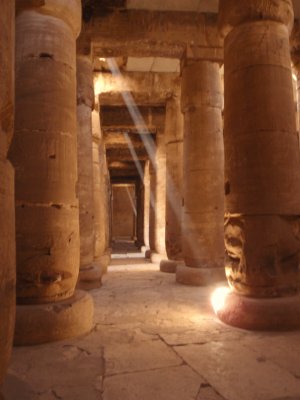 As it turned out Yvonne had been a temple musician in about 2000BC. So had an intricate and heartfelt knowledge of the temple's history and the meaning of all the beautiful carving and hieroglyphics.

One of the most interesting (but least profound) carvings is shown above. Ancient Egyptians are said to be able to see into the future - Whether this mason had a dream about lynx helicopters, tomahawk tanks and jet fighters or this is an impressive prank by some 1950's restorators will probably always add to the mystery of Abydos!

Unlike the majority of Egyptian sites Abydos receives virtually no tourists on account of the fact that an Islamic terrorist group targeted foreigners in the area - the last attack being in 2000. To combat this threat to the national treasury (tourism is the top source of foreign investment and spending in Egypt) tens of thousands of 'Tourist Police' were recruited to mind foreign visitors. These policemen have particularly little to do in the 600km between Abydos and Cairo as most foreigners still bypass the region. Us vulnerable white cyclists were therefore granted a compulsory escort of between 4 and 8 men in 1 or 2 vehicles - for the whole 600km....

Initially the company of stern policeman was a fun novelty - making us feel like real adventurers.

But after a while it became a bit suffocating - Stopping for an al fresco pee is alot less pleasurable with 8 armed Egyptians looking on!

Our excitement mounted as the road signs started a Cairo countdown 200km, 199km,198km etc, etc. The countdown also seemed to get the car/truck/bus drivers very excited too. As the volume and speed of traffic increased the road manners decreased so much so that Rob nearly got in a punch up with a minibus driver. 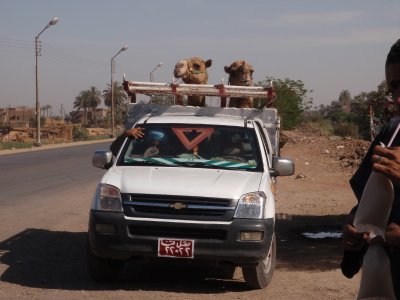 The camels, however didn't seem to feel the stress in the air

It was a welcome relief to pull off the main drag, wash the dust off our faces and head towards the first of the Great Pyramids.

Dashoun lies 25km south of Giza and seems to have been the practice ground for building pyramids. There is a VERY large pile of rubble showing where the fist attempt once stood. Second attempt was far more successful and still stands today - the famous Step Pyramid.... however it doesn't really count as a 'real' pyramid - the steps ruin the aesthetic grace somewhat.

The Egyptian architects then tried an extremely ambitious pyramid which was so huge and steep that it started to rip itself apart... so they had a quick rethink, reduced the angle creating the aplty named Bent Pyramid. 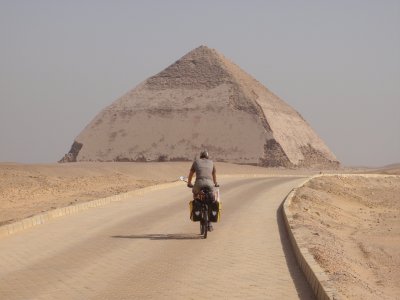 Lessons were learned and applied to build the first of the Great Pyramids - The Red Pyramid. 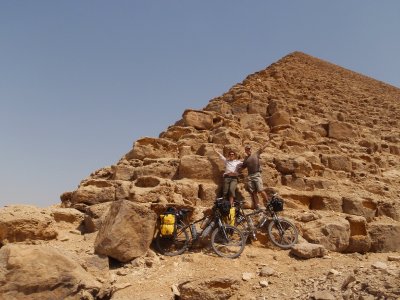 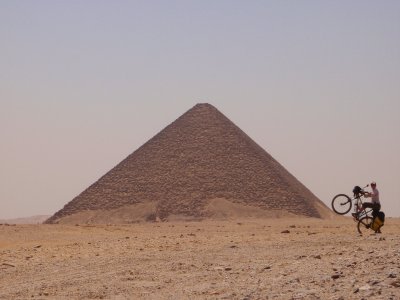 It was incredible to have the pyramids all to ourselves. Our bikes weren't even allowed in the carpark at Giza - let alone cycle them to the top of the pyramid!! 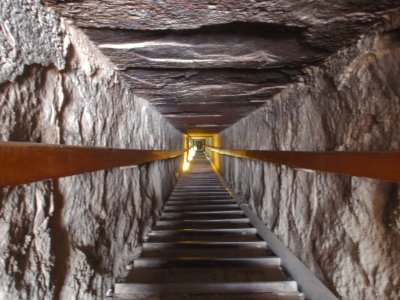 We were also allowed to clamber around and venture inside... the entrance was through a rather small door 1/3 up the Red Pyramid. Then a 60 vertical meter decent down a terrifyingly steep and claustrophobic tunnel. At the heart of the pyramid were several vaulted chambers - revealing the incredible ancient technology - the enormous stones were cut and placed with perfect precision as if with a diamond saw and laser level. The silence was deafening - a perfect final resting place!

I say we had the pyramids to ourselves - that wasn't strictly true!

The last 30km into town were done in the rush hour traffic - racing against the fading light and concentrating hard on not getting run over. 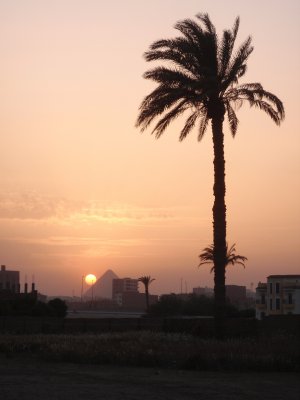 We pulled into our campsite just in time to hastily buy a celebratory beer and swig it wile watching the sun sink over Giza's pyramids and sky scrapers!

We slept well. We made it from South Africa to the Pyramids on our bikes, one bus, one train, 3 ferries, and a few free rides up the hills hanging onto the back of trucks!

Posted by robandpol 05:20 Archived in Egypt

Well I think your exploits are pretty much as remarkable as those of the guys who put up those pyramids. Welcome back to Europe! The press are massing.

by liz and steve

impressive photo biking up that pyramid!as hard as biking up the Alps? any Italian or French police escort there? Welcome back to Europe,cant wait to see you on June 29th

Hey cyclers,
Shyira still often thinks on you. Just today as new visitors arrived. Did I ever tell you, that I finally moved into the Châlet in April. I enjoy it so much (espacially in my last days) Time is running!!! How's your sceduale looking? I'll be home mid July...
You're missed. Be blessed.

Congratulations...You made it thro' Africa ! Now on the last leg of your journey and home beckons. I reckon you will miss Africa it has been such an adventure .Truly insightful and fascinating to follow your travels.
Margaret

WOW... Africa compleated, the rest will be a doddle I am sure! Congrats guys, so proud of you

This is one blog that gets my travelers mind screaming, " i want this now!" These are such good posts and i admire the adventure you guys are taking! definitely a worldly experience of a lifetime!

If ever you're back from this awesome trip, hook us up with more stories at <a href="http://bookitnow.com/world-wild-travel-blog-party-2010/">World Wide Travel Blog Party</a>! We'd like to hear from you!

The Great Pyramid of Giza (also called the Pyramid of Khufu and the Pyramid of Cheops) is the oldest and largest of the three pyramids in the Giza Necropolis bordering what is now El Giza, Egypt. It is the oldest of the Seven Wonders of the Ancient World, and the only one to remain largely intact. It is believed the pyramid was built as a tomb for fourth dynasty Egyptian Pharaoh Khufu (Cheops in Greek) and constructed over a 20-year period concluding around 2560 BC. The Great Pyramid was the tallest man-made structure in the world for over 3,800 years. Originally the Great Pyramid was covered by casing stones that formed a smooth outer surface; what is seen today is the underlying core structure. Some of the casing stones that once covered the structure can still be seen around the base. There have been varying scientific and alternative theories about the Great Pyramid's construction techniques. Most accepted construction hypotheses are based on the idea that it was built by moving huge stones from a quarry and dragging and lifting them into place.
Regards,