Only A Few Thousand Kilometres To Go

We had reached the pyramids but despite our feelings of ecstasy our journey was far from over. We had covered a gruelling 12000km but we still had a few thousand to go. 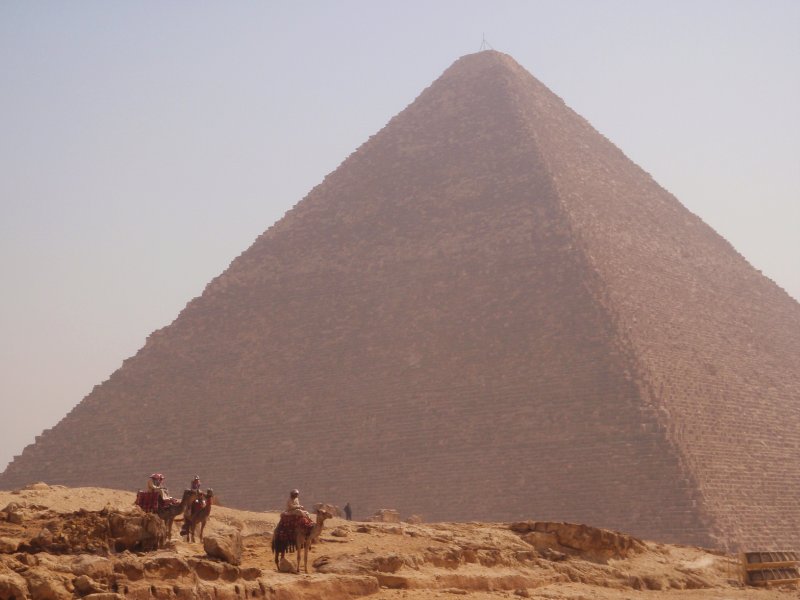 After a night in Giza admiring the distant grandeur of the pyramids we had a day absorbing their greatness before heading into Cairo proper where a fellow cyclist had kindly agreed to put us up. 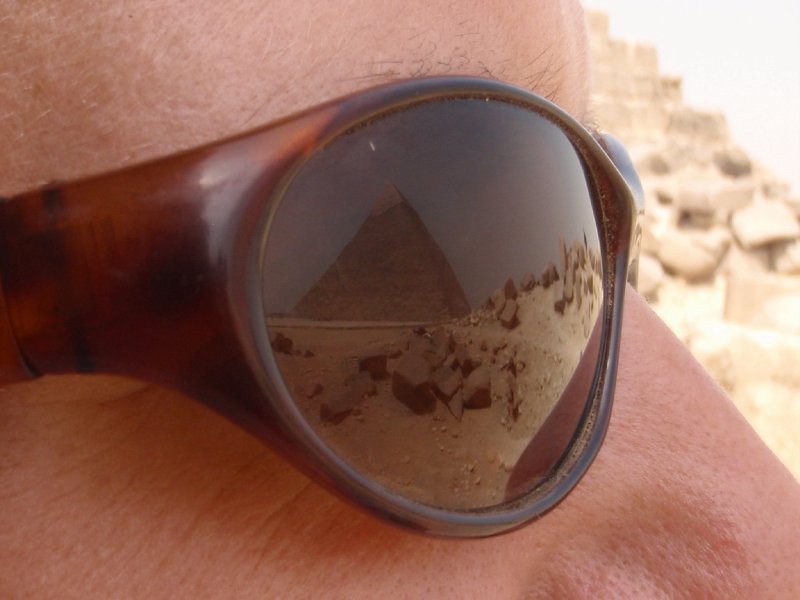 People often ask us what the most dangerous part of our trip has been so far and I believe it could possibly be dodging the traffic in Cairo. I have never experienced anything like it. More than once I felt all my confidence melt away, dissolving, leaving me completely stranded amidst 8 lanes of alien traffic. They never crawl. The traffic progresses by means of intermittent bursts of acute acceleration followed by abrupt brakes. There is a whole section in the Egypt Lonely Planet on how to cross the road in Cairo, the basic gist of which is “find a local, put him between you and the oncoming traffic, and run when he does” yet even following this formula I had to duck out of several attempts. 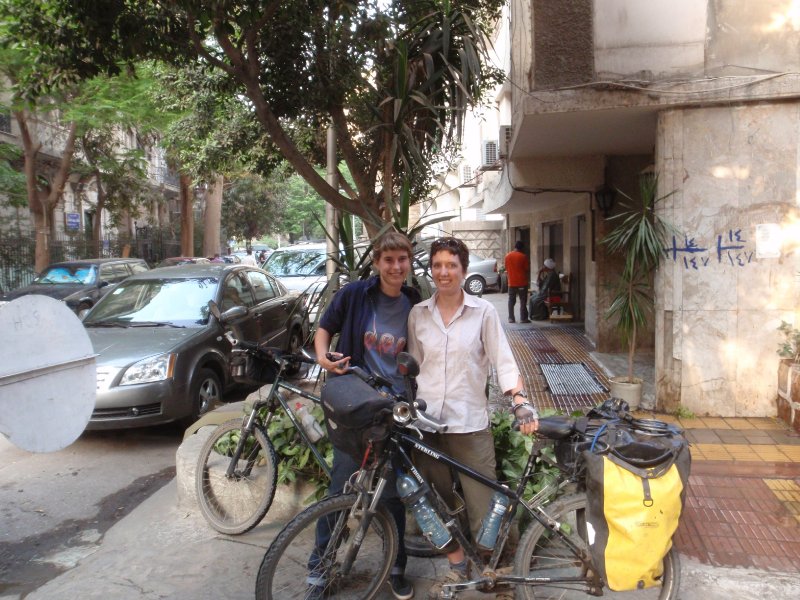 Anne and Mo, her boyfriend, were absolute stars. Minutes after arriving at their flat low range stomach pains which had been grumbling erupted into the acute stages of full blown giardia. When we were recovered sufficiently to venture more than a few metres away from the toilet they did a thorough job of showing us the sights and giving us the low down on Cairo. 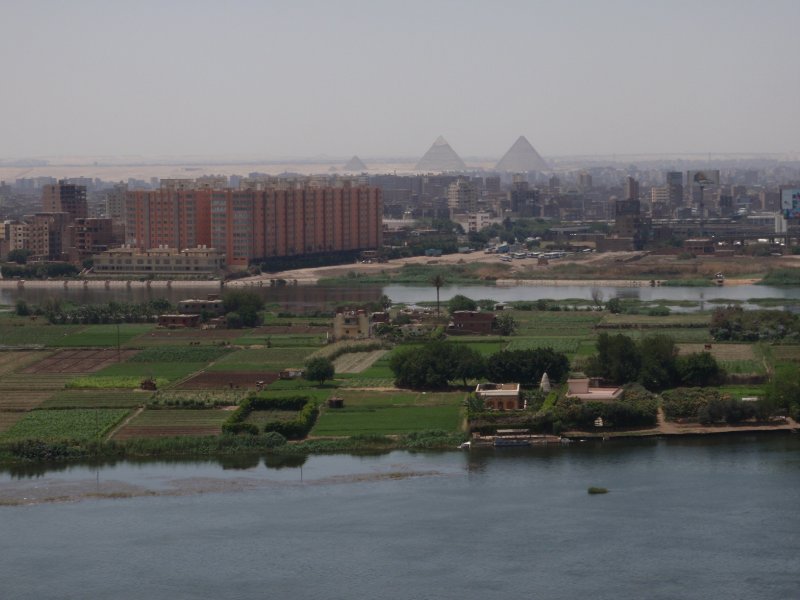 Keen cyclists who had done a trip together from Cairo across the Sinai peninsula to the Red Sea a few months ago in preparation for a longer trip from Cairo to Germany (Anne’s homeland) Mo and Anne inspired us with their tales. Our plan had been to head from Cairo to Alexandria where we would pick up a ship to Europe. However it turned out after much investigation that this would not be possible and it wasn’t long before we found ourselves tracing Mo and Anne’s steps, well pedal strokes, across the Sinai desert en-route to Israel. 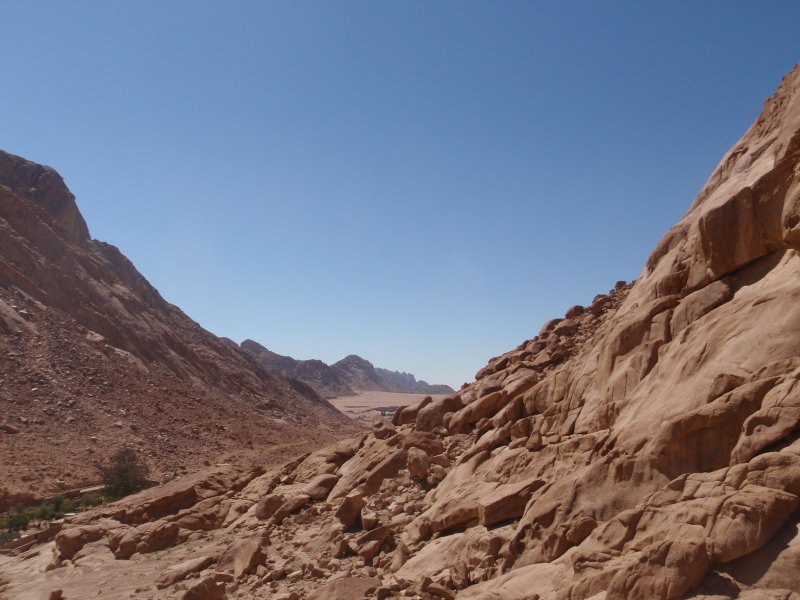 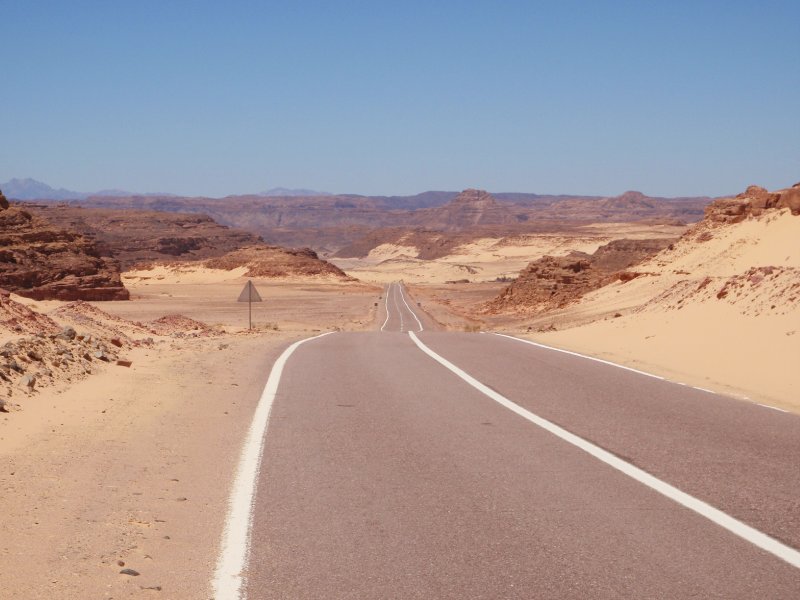 Sinai is barren and beautiful. We stopped off to climb one of two possible mountains thought to be the Mount Sinai of Old Testament fame where Moses received the ten commandments from God, twice! 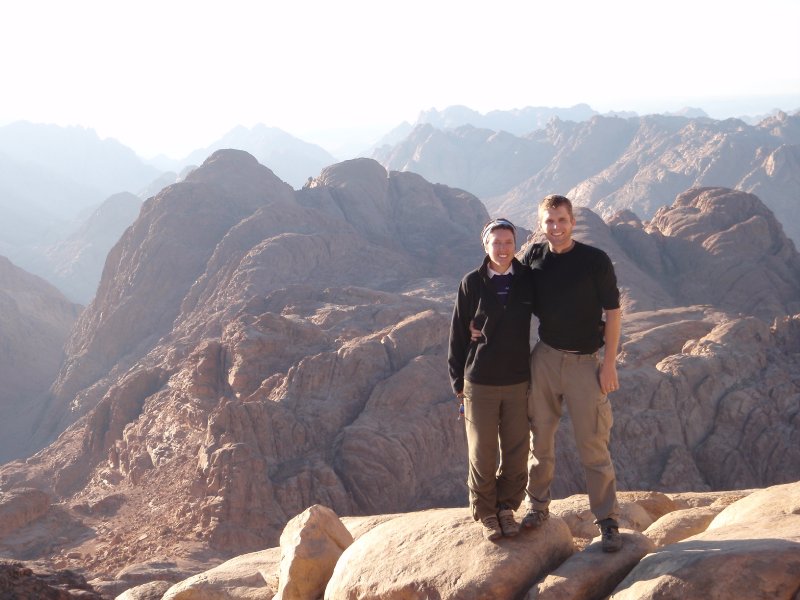 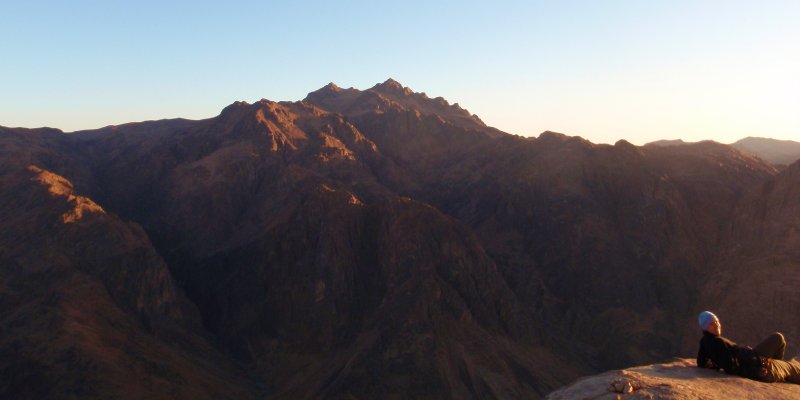 It was incredibly cold on Mount Sinai and in St.Catherines, the little village below but on top of the mountain a cup of tea purchased from a Bedouin who spends his days camped up there also bought us the use of a thick camel-hair rug whilst we waited for the sun to set.

Our onward journey found us escaping the glare of the sun in this Bedouin stop where we were once more treated with heart-warming hospitality as we discovered these men had paid for our meal. They were in the area for a few months working with techniques to preserve ancient Coptic writings in the cliff face. 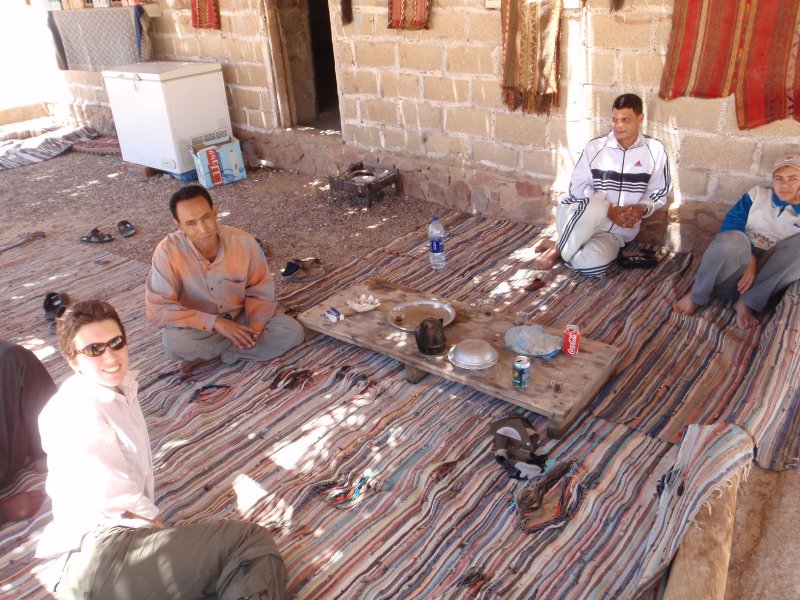 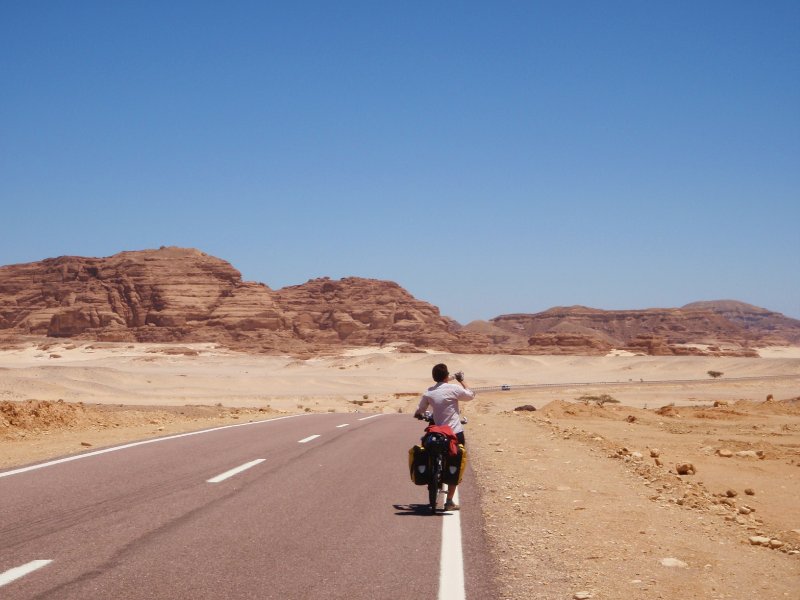 As we came to the eastern side of the peninsula we enjoyed a most fantastic, long and sustained downhill as we dropped down to the Red Sea below.

The eastern shores of the peninsula, and indeed the whole Egyptian coast line, were in the throws of expansion when a suicide bomber drove a van into the Hilton hotel in the town of Taba in 2004 stopping the development dead. Consequently the coastline has an eerie “ghost town” feeling as you cycle past deserted half built complexes. However we were happy to find somewhere with some life on the beach north of Nuweiba. 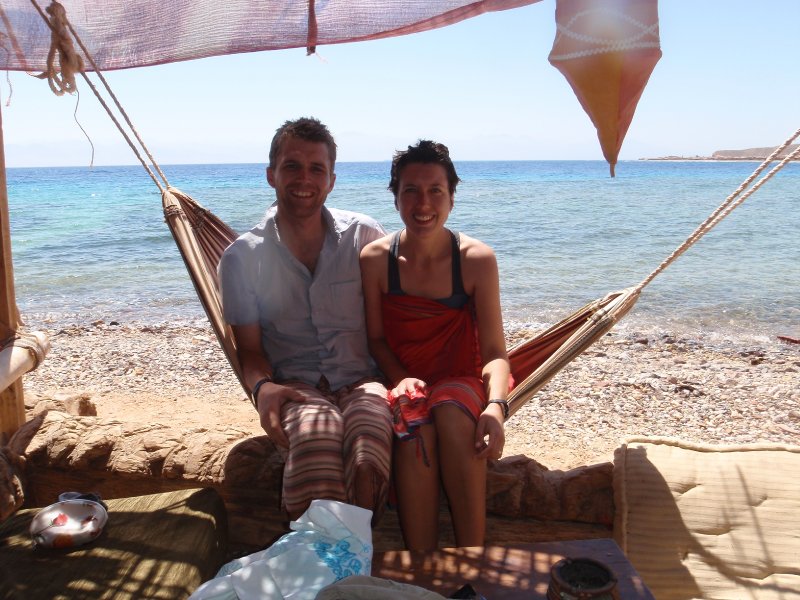 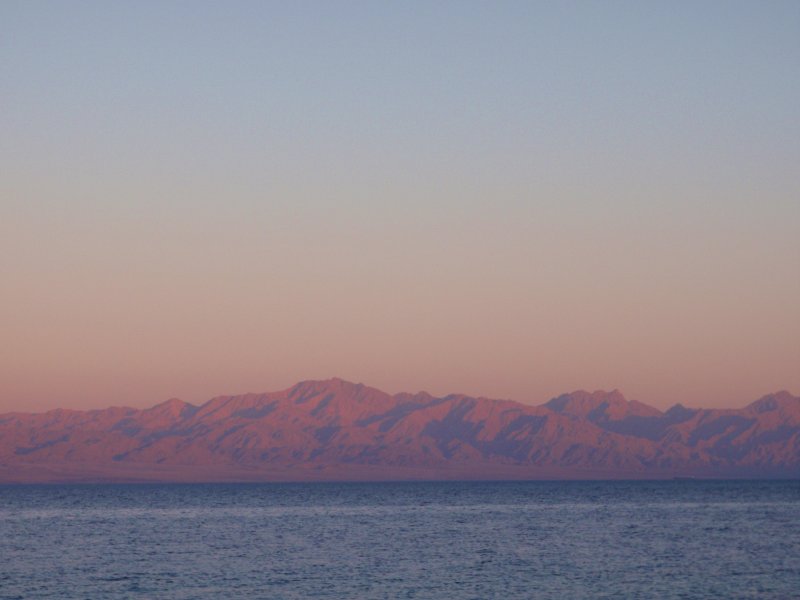 We sat on the beach watching the coastline of Saudi Arabia flush pink with the sunset. The Red Sea coastline is unbelievably beautiful and we were so pleased to find ourselves there. We walked into the water off the beach with a snorkel and mask and found ourselves submerged in an underwater paradise. 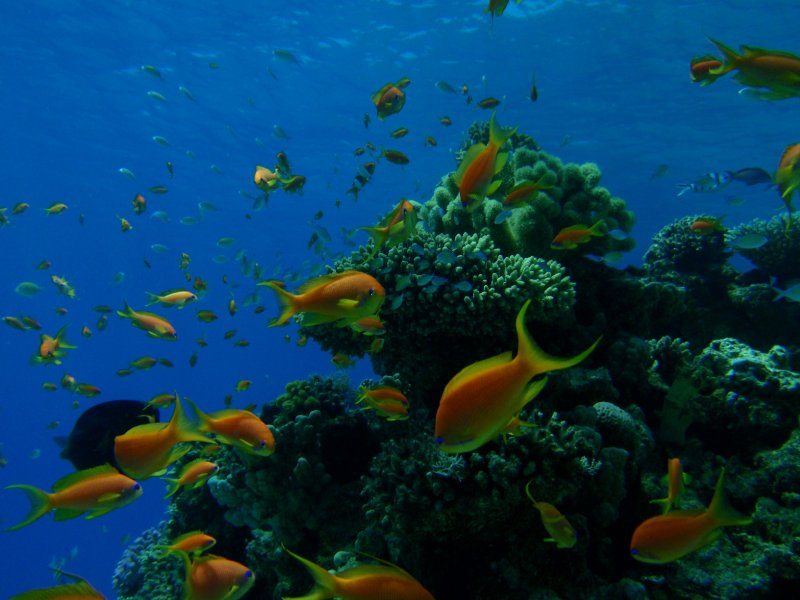 We ended up staying a couple days longer than we had planned to.........

absolutely magic pictures from pyramids, MtSinai to under the sea.. what a stunning world we live in and you have created a live picture of it all for us to enjoy,Thanks tons. on on now nearer and nearer to Carlo's! Best love L an R.

by liz And Ruli