but grazed by Gaza

We struggled out of our seaside chalet and back onto the road. We were starting to get travel weary and getting back on the bikes to head into another hot windy day didn't really fill us with joy. We followed the surprisingly hilly coast road past mile after mile of windswept concrete skeletons and parched gardens of abandoned half built hotels and villas overlooking the turquoise waters. 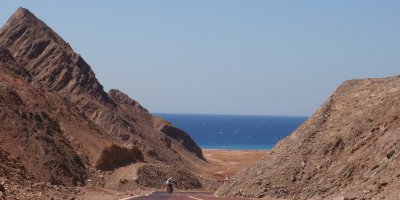 (We only took photos of the picturesque bits!)

This coastline had been a rapidly expanding hub of up market tourism catering for Egypt's wealthy Israeli neighbours - that was until 2006 when some young Arabs drove a truck full of explosives into the foyer of Taba Hilton (The Israeli/Egyptian seaside border town) and detonated themselves killing scores of people and destroying most of the front of the hotel. Tourism to this coastline stopped overnight.

A week previously we had been sitting in a smart bar in Cairo talking to an Egyptian friend. We mentioned we would soon be in Israel.
"Don't say that word in public" he said. "You must refer to that place as 'The Jewish State'. In Arabic we refer to them as 'The Enemy' "
"But this is Egypt!" I protested - "The most moderate Arab nation in the world! You are friends with 'The Jewish State!'"
"No" He said firmly. "Only our government, and then only on paper"

As we neared the Israeli border we could see the dry hills of Saudi Arabia over the sea, the smart high-rise flats of Eilat, the strategic Israili town jostling the Jordanian port of Aqaba for a tiny but immensely important portion of The Red Sea coast.

You can see why Israel is security conscious. Most of their neighbours are oil-rich and openly hostile and their only 'friend' in the Middle East refers to them as 'the enemy'!!

We were expecting tight security at the border but that was an understatement!

There were a lot of mean looking male and female soldiers wearing dark glasses and carrying some pretty high tech weaponry. Everything was X rayed carefully. We even had to disassemble the bikes and send them though the machine! Polly was dusted for drugs and explosives. We were both interviewed independently about why we went to Sudan and Egypt.

"Why did you visit Sudan?"
"We've cycled from South Africa - Sudan is the biggest country in Africa so it is very difficult to traverse the continent without crossing it - and it is a very interesting place."

"Did you meet any people in Sudan?"
"Yes many many people, we found the people in Sudan incredibly friendly!"
The security official looked unimpressed and increasingly suspicious.

"Did you ever stay in their homes?"
"Oh Yes, The Sudanese are so hospitable, they were always offering us cups of tea and a bed for the night, but we usually camped in the desert."
"Did any of them give you any packages or documents."
"Oh no, only cups of tea and sometimes cake!"

"Your entry and exit dates - you were in Sudan for over 2 weeks. Why so long?"
"Sudan is HUGE! We crossed at about the thinnest point we could and it was over 1500km. 1500km on a bike is pretty good going in under 3 weeks - especially as we had a headwind most of the way"

2 hours and many questions later we were begrudgingly aloud into the Jewish State. Incredibly there intense search had not revealed 2 very mean looking lock knives, a canister of MACE spray - our little piece of self defence - that is illegal to carry though any international border. A pressurised bottle of petrol and US$300 hidden inside the bike frames.

Walking though the streets of the Jewish town was as if we had just disembarked a transatlantic flight and were walking the streets of Texas. A scorching desert but all the amenities of Western life. Air conditioned malls, coffee shops, frozen yogurt stands, burger kiosks, an IMAX cinema, lots of people wandering around chatting in broad American accents. But there were no tubby Americns here - most of the young men were sporting tight tee shirts - showing off their muscles - whipped into shape by a minimum of 3 years intense military service. Those not wearing tight tee shirts we still in their khakis carrying their combat equipment and licking ice creams.

We didn't have time to do too much wandering and ice cream eating as we only had 2 days to traverse the whole country to get to the port of Ashdod where the cargo ship was waiting. We didn't know how far away Ashdod was from the border as obtaining a map of Israel in Egypt was completely impossible. There wasn't even any info on Israel on Googlemaps when accessed from an Egyptian computer!! As it turned out Israel is a tiny country in comparison with all the other countries we had travelled though so Ashdod was within 2 days cycling of the border!

We set out across the desert. Our misconception of deserts as flat sandy places was quickly changing as we climbed and climbed away from the Red Sea and into the interior towards Beer Sheva - Where many of the Old testiment greats resided for some time e.g. Abraham, Isaac, Jacob, Samuel.

The desert was only broken by the occasional small valley filled with lush vinyards/peach/citrus/wheat/or sunflowers - all completely dependant on an irrigation pipe that we followed along the road. We assumed it came from the Jordan in the north of the country. You can see why the dead sea is dropping by 6inches/year.

For a long period we cycled parallel and about 40-60km from the Gaza strip and as evening approached we started looking for a place to camp. I spotted a lovely looking patch of trees in the middle of a huge field of wheat. We headed over. As we got closer we could see there were people in trees. Having not seen any Arabs in Israel so far - we thought it would de interesting to go and chat.

Khumal was shoeing and lunging a beautiful stallion. We sat under the trees for almost an hour and chatted in gesture and broken English to him and his friends. After a while we asked if it was Ok for us to set camp the night - they had no objections so we pitched our tent and cooked our dinner under a tree at the other end of the copse. As darkness fell and Khumal's friends joined him for a Friday night drinking session around a fire and things became less idyllic and harmonious. We went to sleep but were woken several times by drunken shouting.

"You, English" then non descript Arabic.

Of course then you start to think - 'bugger we are 40km from the Gaza strip - Western hostages are a valuable commodity. Even if Khumal is our wholehearted friend he isn't be able to control his drinking buddies as amply demontsrated by their yelling.'

I slept fitfully, clutchinng a knife in one hand and the can of MACE in the other. Then I heard a twig snap.

I was immediately fully alert - heart pumping I looked through the tent inner to see the siluette of a large man standing over us.

"Hello - What do you want?" I said while quickly unzipping the tent to get in a less defenceless position.

The shadowy figure said nothing - turned his back and slowly walked off through the darkness. We didn't sleep very well after that!

We were back on the bikes early the next morning and cruised down down down to Ashdod - were we hoped our boat would be waiting. Excitement welled up in us as the Meditteranian came into sight. The beach felt just like Bournemouth, dumping the bikes we ran across it dodging sandcastles, brolleys, deckchairs and sunburned girls wearing too little and dived in in our undies! Still well over 1500km of cycling to go - but we felt so close to home! 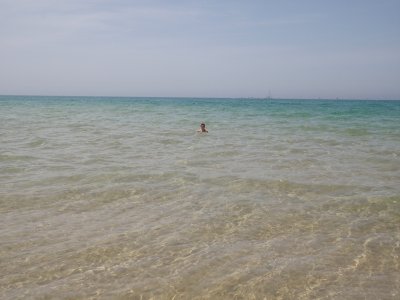 Fully refreshed and high on lack of sleep and adrenalin from the night before we headed to Ashdod port to find our passage to Europe…. But the 10 storey cargo ship was not there!!