After a very relaxed (and very hot) day recuperating 1km from the equator. We headed off in lovely fresh smelling clothes ready for anything.... well almost anything.

We were aiming for a backpackers campsite just 40km away as the other option was Fort Portal – a nice little town but 100km away and 500m higher than the start of the day and due to mid day temperatures being well over 30 we thought it best not to push it.

We arrived at the backpackers mid morning and were still bursting with energy. Rob had a 'Brainwave':

“How about we carry on - not to Fort Portal but to a beautiful camping spot by the famously beautiful Crater Lakes.”

This would involve making a 'short cut' that was not marked on the GPS or our map (Rob had seen the road in another traveller's guidebook a week ago). Spirits high – we all thought that this sounded a fantastic idea so off we went.

2 minutes off the tar and we had our first misshap. A slow puncture in pol's rear tyre (only the 3rd in the past 6000km) We pumped it up and carried on. 5 minutes later flat again so parnniers off, wheel off, tyre off, inner changed, pumped up. 2 minutes later flat again – the spare inner had a split. Panniers off, wheel off, tyre off, slow puncture in original inner identified, fixed, pumped up. Off we set. Now starting to get sweltering hot. No shade. Road very rough. Small hill after small hill after big hill after small hill..... slowly gaining height.

The heat and hills were becoming unbearable. We considered stopping waiting in the shade of a tree until the temp started to drop but realised that our ave speed had dropped from 20km/hr to about 5 and there was no way we would get to a camping spot with water supply before dark unless we plodded on in the heat and dust.

Ben P got a puncture. Ben H then noticed his inner tube was trying to escape out of a huge gash in the side of his tyre. 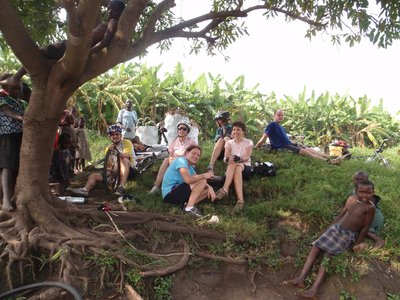 We stopped for a break and a think...

1km further on and Beth realised she had left her cycle gloves, so back she and Pol went. The rest of us continued until the next junction – that turned out to be about 200m away – so there we waited.

The girls returned (Beth having found her gloves resting on the back of her bike!). Off we went again. Ben P toppled off the heavily laden bike, which made Rob topple off his. (Ben's saddle ripped off it's holder. Rob's bike ended up resting on handles and seat as it's so top heavy!) 20 mins later Ben's seat was zip tied and duct taped together and off we went again. Everyone was getting tired and Pol and Ben P zoomed off ahead to go and try and find our camp site and someone with a vehicle who could come and pick up the stragglers.

The hills and heat continued to drain even the fittest legs and Ben P took a spectacular tumble down a steep hill. Dusty and with Ben literally dripping blood, the advanced party got to our agreed campsite – only to find that it was a rather upmarket lodge and not a campsite at all! However a friend of the owner was happy to help in rescuing the stragglers - who having looked like they weren't going to get to the camp before nightfall 20km earlier had dug deep to get over the hills and were now cruising downhill with the lake in sight.

As we were the only guests (probably for quite some time) we set up camp on the balcony of the biggest building overlooking the lake (there was no other flat ground). The locals were exceptionally helpful and seeing that we looked ravenous produced two cute white bunnies for us to cook for our dinner – we politely declined and instead feasted on mashed potato and tomatoes before collapsing into bed. 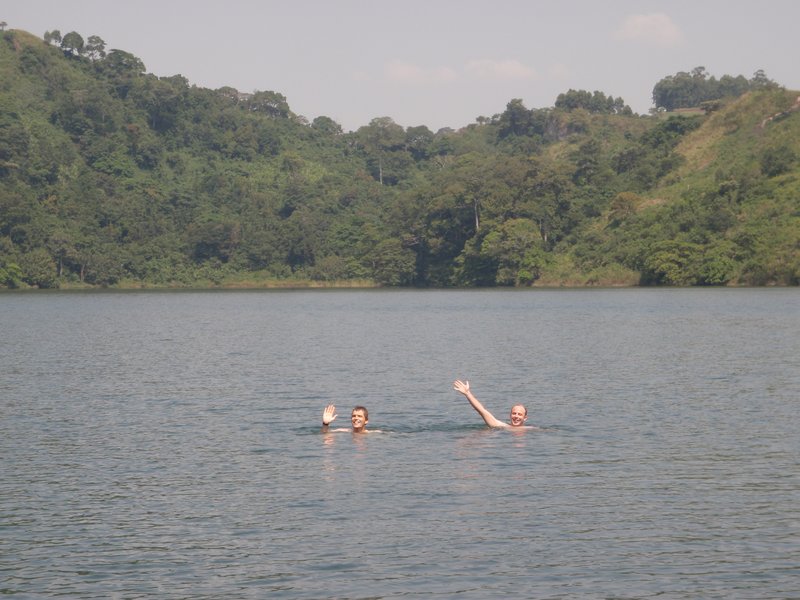 The following morning we could really appreciate the stunning view and the crystal clear lake. We had seen a hippo in the crater the night before but there was no sign of it by mid morning we went for a plunge.... only to spot the hippo again in our swimming area a few minutes after we got out! 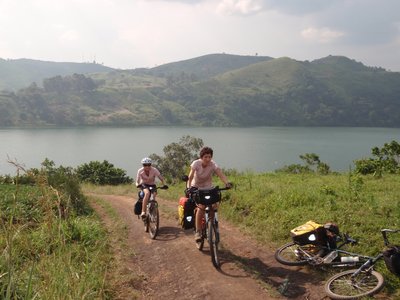 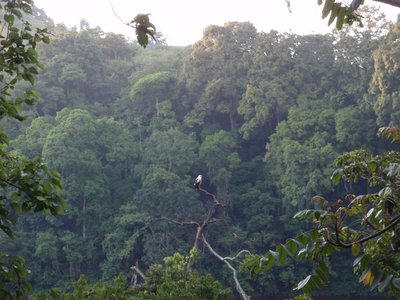 At 'the best campsite in Uganda' we met a lovely American who saved our skin (literally) by resupplying us with suncream. She was also raving about the local Chimps – so we booked ourselves in for a chimp walk.

The day of the chimp walk I was in a sullen mood. Just after booking our afternoon walk (for $110each) we were told it is much better to track chimps in the morning as they are very docile and inactive in the after midday, therefore not calling and difficult to find).

The beautiful foliage, elephant tracks and huge butterflies flitting here and there did little to lift my spirits as I counted the minutes tick past and wondered to myself - “was the last 70 seconds worth 1 US$!”

On we trudged – the guide tried to lift our spirits telling us: “They were in this tree this morning – but they can move very fast.” “There are 20 000 chimps and 250 verities of butterflies in the forest”. “! got chased by elephants – just here a couple of months ago - I thought a was going to die – I hate elephants.” “90% of the time there is 100% chance of seeing the chimps – 10%of the time there is a 0% chance of seeing them”.

My mood darkened and darkened as I tought we were in the unlucky 10% of clients that had a 0% chance of meeting the cuddly primates - but all of a sudden we heard a call in the distance, then another. We picked up our pace and within a few minutes we had spotted knuckle marks in the mud 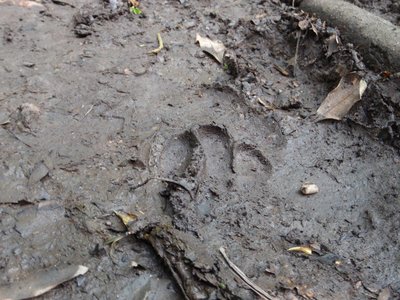 and then were standing next to a big chimp munching figs with his whole troop playing about over our heads and half chewed fruit thudding all around us.

We sat and watched for 40 minutes – enthralled by their interactions and complete disregard for us - until urgent screams sounded in the trees a km away and in the midst of a deafenening carcopheny of noise they rushed off to join the fight. “Can we go and see” I asked the guide - “No” he said firmly “It is either a buffalo, elephant or foreign chimp – if its a foreign chimp they'll kill him”. Oh – chimps are not as cuddly as I thought”

It was an exciting moment on the evening of our second day at Lake Bunyonyi when the others arrived. They looked slightly off colour as I had told them it would be a 10km downhill after their 9hr bus journey but it turned out to be a HUGE uphill. (who would have thought a lake would be uphill from the nearest town?!)

The guys (Ben, Ben, Ronel and Vicci) quickly got into the groove despite a few early mis-haps: 4 punctures and a side wall split in The Hud's 'racing tyres'. A high speed tumble by both Vicci and Proz and the inevitable cycle short tan line on everyone.

On our second day together the group split and Pol, Rob, Beth and Miriam took a detour to put Miriam on a bus back to Rwanda. Leaving the GPS with the others was a definite mistake though – and resulted in our easy 50km day changing into a rather more challenging 90km day as we headed South for quite a while before realising we should be going North! 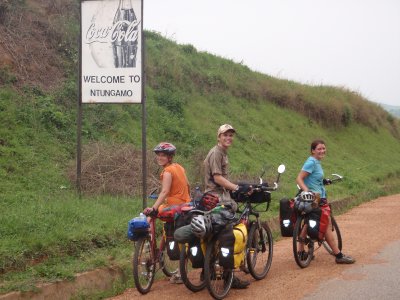 Us arriving at our destination... eventually!

We heard that the bus left from a specific point on the highstreet at 8am.... 3 ¾ hours later Miriam plus bike were packed onto her bus... we hope she did get to Rwanda... but if you are reading this Miri – send us a message! We miss you.

The 7 remaining cyclists reconvened at a slightly odd Hot Springs. We wish we had a photo of the 300 Naked African bodies sitting in the steaming puddle but the 600 African eyes watching us prevented us from taking a snapshot. 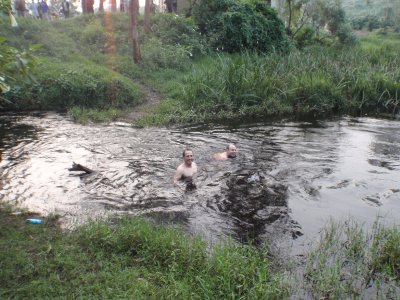 The mzungus decided to have their wash in the river by the Campsite, much to the amusement of the local population who crowded onto the Bridge 15m away.

Despite the campsite manager's extreme kindness (Samson) we got little sleep overnight and moved on at first light. 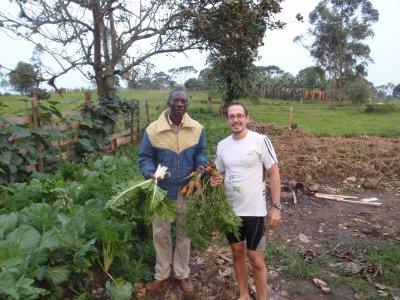 Samson and Ben P with fresh produce plucked for dinner. 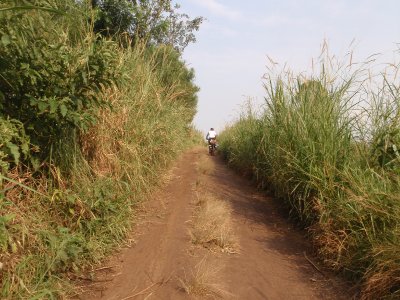 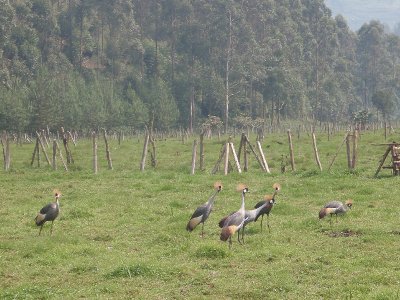 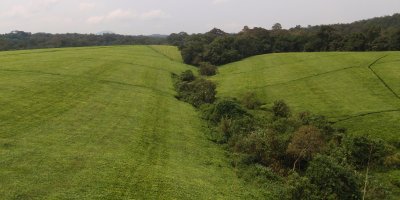 and sailed past acre upon acre of vibrant green tea plantations interspersed with incredible native forest bustling with exotic birds and monkeys.

As we cruised down into the Savanna plains of Queen Elizabeth National Park the unforgiving sun beating on our backs reminded us that we had descended over 1000m during the past 3 days and were now approaching the equator. We pushed on to 'Fig Tree camp' motivated by thoughts of a cold beer and shower but on our arrival we found that 'Fig Tree camp' was in fact a park office. It did look out over the impressive chimp filled forests of Kyambura Gorge: 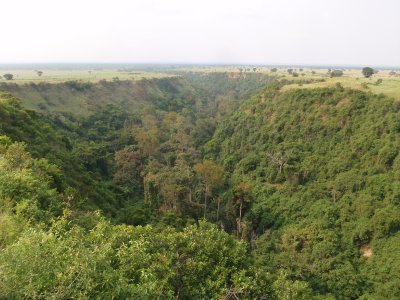 There were no cold (or warm) beers and even after some pitiful pleading no chance that we could camp there. It was another 25km to the nearest accommodation. Dusk was rapidly approaching so it was a rather nervous dash we made across the Queen Elizabeth Park keeping a keen lookout for Elephants, Lion and Buffalo.

To our relief we only saw the latter 2, at a distance, (but that shape in the grass could have been an impala!) 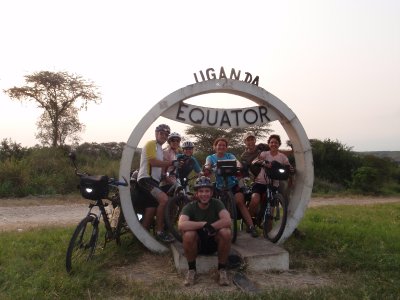